I can move Britain into top gear with election win, Boris Johnson says 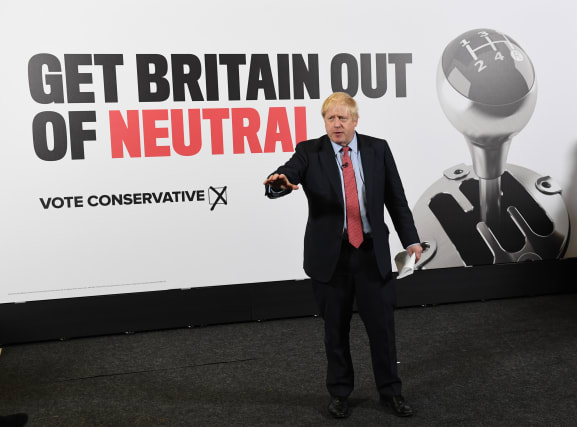 Boris Johnson says he wants to put Britain in “top gear” after claiming the country will be “stuck in neutral” if voters boot him out of Downing Street.

It declared: “Get Britain out of neutral.”

A gearstick was also pictured which offered a choice of five gears and reverse, although there was no confirmation on the poster of the preferred option.

In a rallying speech to a small number of Tory activists, Mr Johnson said of Labour leader Jeremy Corbyn’s Brexit position: “He’s evolved over the course of this campaign – he used to be indecisive, now he’s not so sure.

“What he now says is that he’s going to be neutral on the greatest issue facing our country.

“As a result of having a Corbyn-Sturgeon coalition, the whole country would be stuck in neutral next year, the year after, for the next Parliament.

“It would be a disaster for our politics because he doesn’t have a deal and he has no plan to get it.”

Mr Johnson went on: “If we can get Brexit done, if we can get a working majority in Parliament next week, then we’ll finally be able to get this country out of neutral, into first, into second, third, fourth – how many gears does that thing have?

Mr Corbyn has said he wants to negotiate a new “sensible” deal within three months of coming to power.

Within six months, a Labour government would hold a referendum which puts the deal to voters alongside the option to remain in the EU.

Introducing the PM, Tory candidate Helen Whately earlier said people will be heading to the polls “in a week’s time”.

The PM opened by joking: “One minor correction: don’t go to the polls on Friday – go on Thursday, because that is the day we will change the course of this country’s history.”