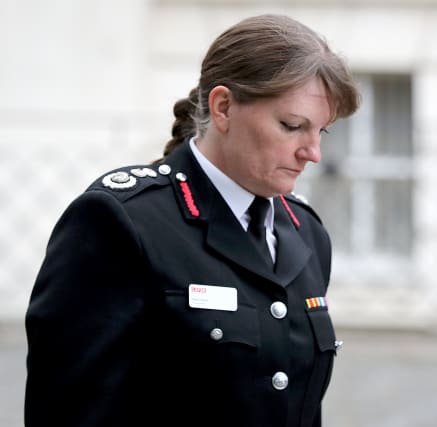 The early retirement of London’s fire chief has been welcomed as a “milestone” for the victims of the Grenfell Tower fire by relatives.

London Fire Brigade Commissioner Dany Cotton, 50, is to leave her role at the end of this month, earlier than expected, in the wake of criticism over the service’s response to the blaze.

The capital’s first female fire chief, who had been due to retire in April 2020 after 32 years of service, had previously resisted calls from Grenfell families to resign following a critical public inquiry report.

Nabil Choucair, who lost six family members in the fire, told the PA news agency: “It’s a shame that it’s taken pressure from the families.

“If she cared and understood, she would have done it a long time ago. It should not have taken this long, it’s a disgrace.”

Flora Neda, who lost her husband in the blaze, said she was “happy” about the news.

“It makes us feel not quite as hopeless, it gives us hope that justice will be done,” she said.

A representative of the Grenfell Next of Kin group said the news was “emotional” for many relatives.

“This is quite a milestone really. In the scheme of things, it’s a small step forward,” she said.

“It was really upsetting and frustrating it took this long. It wasn’t a lot to ask.”

The first report from the Grenfell Inquiry found that the London Fire Brigade (LFB)’s preparation for a tower block fire such as that at Grenfell was “gravely inadequate” and its lack of an evacuation plan was a “major omission”.

Inquiry chairman Sir Martin Moore-Bick said more lives could have been saved in the June 2017 fire had the brigade’s “stay-put” policy been abandoned sooner.

Ms Cotton welcomed the report’s recommendations, saying they would be “carefully and fully” considered by senior officers.

Commenting on her retirement, Ms Cotton said she was “proud” and “honoured” to have served alongside London fire service staff during her career.

She added: “I will never forget tragedies like the Clapham Junction rail disaster or the acts of terrorism that we have faced, but Grenfell Tower was without doubt the worst fire we had ever experienced.

“The brigade has and will keep making the changes it can make and continue its fight for all of the other changes that are needed, to prevent such a terrible incident and loss of life from happening again.”

LFB said it had agreed with City Hall to bring forward Ms Cotton’s retirement “to enable a timely handover” to the next commissioner.

London Mayor Sadiq Khan thanked Ms Cotton, saying her replacement would be appointed “to drive forward the changes being made within the brigade, and to deliver on the recommendations made in the Grenfell Tower Inquiry report”.

The LFB said interviews for the role of commissioner would take place this month.

Grenfell United, a group for bereaved families and survivors, said: “This change in leadership is needed to keep Londoners safe.”

A spokeswoman for campaign group Justice 4 Grenfell said: “If the suggestion is that actually she’s stepped down so that somebody else can take over to drive forward the changes that have been suggested from phase one, then that’s positive.

“However, if she steps down and no change happens, especially because there’s not the political will at central government level, then four months has made very little difference.”