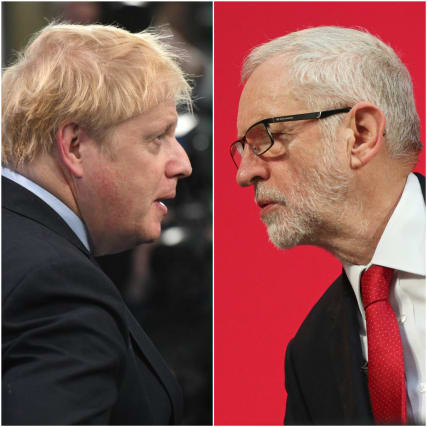 Boris Johnson and Jeremy Corbyn are going head-to-head on the BBC for their second and final televised debate of the General Election campaign.

They are facing questions from a studio audience in Maidstone, Kent, moderated by former BBC political editor and Radio 4 Today presenter Nick Robinson.

Mr Corbyn is asked about his position on Brexit and repeats that he wants to rise above the debate and implement the decision made by the British people.

“You cannot negotiate a deal on an issue you’re neutral about,” Mr Johnson claims.

A dig from Mr Johnson about the Labour leader’s claim to not want to break up the union. He says he finds it strange that this is Mr Corbyn’s position after years of supporting the IRA who aimed to bring about a united Ireland.

Mr Corbyn said that his aim was peace in Ireland and reminded the PM that the Good Friday Agreement was agreed under Labour.

Prominent Conservatives attacked Jeremy Corbyn for his position on Brexit.

Matt Hancock tweeted: “YET AGAIN Jeremy Corbyn fails to answer what his position is on Brexit. He can’t say he will get Brexit done”

Nicky Morgan tweeted: “It simply isn’t credible for Corbyn as PM to ‘negotiate a Leave deal’ and then stand back from the referendum he advocates – for a start why would the EU negotiate such a deal if the UK’s leader doesn’t believe in it”

They are next asked if they can guarantee Brexit will happen in 2020 – Mr Corbyn says he can guarantee a final say vote in a second referendum.

Mr Johnson launches in a second question that was asked on what advantages the UK will have outside of the EU – and runs through many of the policies he has mentioned earlier in the campaign.

He then questions how Jeremy Corbyn can get a new Brexit deal if the Labour front bench doesn’t believe in the move.

The first question from the audience is about whether the leaders are worried that the intervention of former prime ministers Sir John Major and Tony Blair will have an impact on the election results.

The questioner added: “Are they just a couple of old has-beens?

Mr Johnson said of Sir John: “I don’t think he’s right. And we have a fantastic plan to get Brexit done. It’s a deal that’s ready to go. It’s oven ready. We can get it back into Parliament by Christmas if we have a majority Conservative Government.

“Unlike Mr Major, I lead a party that is now totally united. All 630 plus Conservative candidates at this election actually back my deal.”

Nick Robinson put it to Mr Johnson that they are united because he got rid of people he did not agree with, but the Tory leader said: “We have a very very broad spectrum of views in our party, and they all back our deal.”

Mr Corbyn is the first to give his opening statement, saying voters need an “ambitious government on their side”.

He added: “Four million children live in poverty, people can’t get appointments to see their GP, elderly people can’t get the care they need and millions of families are struggling to pay bills and make ends meet.”

In his opening remarks, Prime Minister Boris Johnson urged voters to give the Tories a majority.

He added: “The only way to unleash the potential of this whole country is if we get a working majority Conservative government because the only possible alternative is another hung parliament.”

Format: Each leader will make a 60 second opening statement. They will then debate questions put by members of the audience who have been picked for the BBC by polling firm Savanta ComRes and questions submitted via the BBC website. There will be final closing statements of 30 seconds each.

Audience: Selected to include equal numbers of Conservative and Labour supporters, with a smaller number of undecided voters and supporters of other parties.

It has also been weighted to include a slim majority of Leave voters over Remainers in the EU referendum, apart from a few younger voters who were not old enough to vote in 2016.