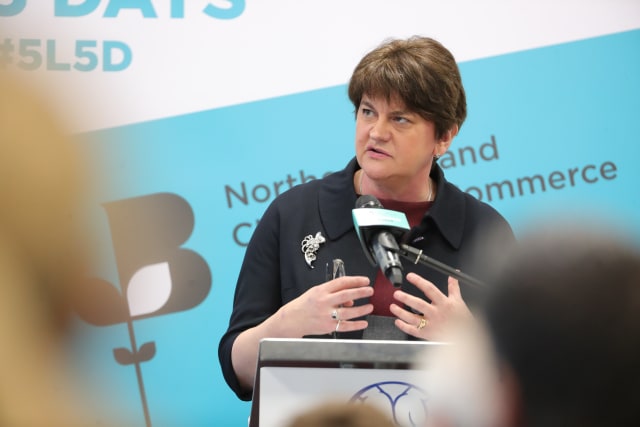 Arlene Foster said she believes there will be opportunity for “significant influence” at Westminster after the General Election.

Mrs Foster said they scored “billions of additional investment” through their confidence and supply deal with the Conservative Party.

With the General Election less than a week away, Mrs Foster said it is important for Northern Ireland to have a “strong voice” at Westminster.

She said: “I anticipate there will still be the opportunity for the largest party from Northern Ireland to have significant influence at Westminster after this election too.”

She added: “It is in all of our interests to see Brexit satisfactorily resolved. And in a manner which best suits Northern Ireland.

“The DUP voted against Boris Johnson’s Brexit deal on account of the risks to the economic and constitutional future of Northern Ireland.

“We will only support a deal that protects the economic and constitutional integrity of Northern Ireland.

“It suits no-one, even companies from the Irish Republic, to have barriers to business across the Irish Sea. We still want a sensible Brexit deal but it cannot introduce unacceptable impediments to trade.

“One of the difficulties with the deal on the table at the moment is that we are not leaving as one nation, part of the nation is being left behind and that’s why we need to change that deal and we need to make it better.”

At the election hustings organised by the Northern Ireland Chamber of Commerce at Allstate in Belfast, the DUP leader reiterated her opposition to a Labour government.

She said: “I hope it is not a Jeremy Corbyn prime minister that I wake up to on December 13 because I think it’ll be a real problem not just for Northern Ireland but for the whole of the United Kingdom.”

The Stormont Assembly has been collapsed for almost three years following a break down in relations between the DUP and Sinn Fein.

Fresh talks to break the deadlock are due to start on December 16.

Agreement must be reached before January 13 when existing legislation runs out.

Mrs Foster said: “All roads lead back to devolution and the frustrating thing is that it hasn’t happened to date.

“I think it will happen now, I think people have a general view as to where the difficulties lie.

“I just hope that other issues aren’t added to the agenda and that we actually deal with the issues that came up in the last talks.

“I suppose my one fear about the talks is that every time we go in, there seems to be another issue added to the agenda, we are not going to be able to sort out how we view the past and how we deal with the past before we get an Assembly going again.

“I think the gaps are narrow and therefore we need to deal with them in the short period of time that we have.”