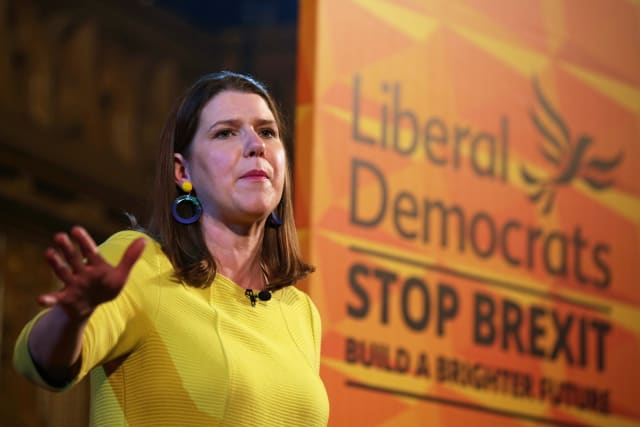 Liberal Democrat leader Jo Swinson has urged activists to “channel the suffragettes” to fight for a “brighter future” as the campaign for Number 10 enters its final week.

Speaking at a rally in Edinburgh for party members, Ms Swinson urged campaigners to fight for the future of young people in the party.

The Lib Dem leader also told the crowds to reject Boris Johnson, dubbing him “Britain’s Trump” a moniker bestowed upon him by the US president after he was elected Prime Minister.

She said: “If it wasn’t for the suffragettes fighting more than a century ago, I wouldn’t be standing here today as the leader of the Liberal Democrats.

“We wouldn’t have the fantastic women candidates set to be MPs right across the country.

“They were fighting for the future.

“Because we have to fight for our children and their future.”

Ms Swinson said the election on December 12 was “more important” than any she could remember, adding: “Whether that’s the climate emergency, where we have just a decade to take action that is needed.

“Whether it’s keeping our United Kingdom together because there is no doubt that the constitutional chaos of Brexit is putting our family of nations under strain.

“Whether it’s stopping Brexit itself because we know the damage that will leave for the next generation.”

Ms Swinson ended her speech with a rallying cry to supporters, saying: “Liberal Democrats, we have an important job to do.

“We have just one week left. It’s cold and it’s dark… but I want you to get out there and knock on even more doors and deliver even more leaflets.

“I want you to do it for their future because they deserve a better future.”

“We know that he’s not going to keep the promises that he has made.

“We’ve got a leader of the opposition who, frankly, on the issue of Brexit, doesn’t want to say anything at all.

“I am proud, that the Liberal Democrats are the strongest, biggest party of Remain and we will continue to stand up for our place in the European Union.”

Mr Johnson’s record on Scottish independence was also under fire, after the Lib Dem leader said he could not protect the “family of nations”, because “we all know he’s not much of a family man” a dig at the Prime Minister’s personal life.