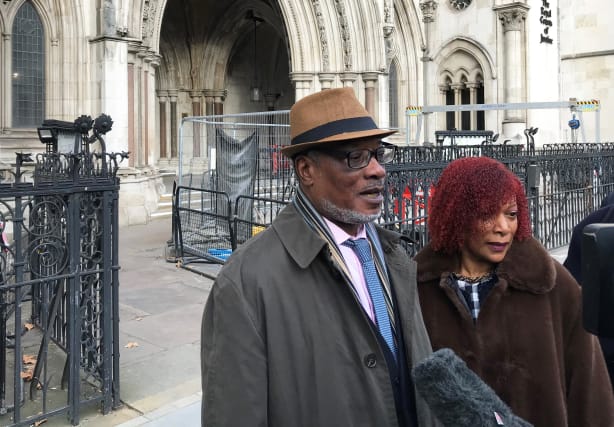 A man whose name has finally been cleared, nearly 50 years after being wrongly convicted on the evidence of a corrupt police officer, has called on other potential victims of miscarriages of justice to come forward.

Winston Trew, now 69, was jailed for attempted theft and assaulting police in 1972, but always maintained his innocence and said he was “fitted up” by a British Transport Police detective sergeant whose career ended in disgrace.

Mr Trew, Sterling Christie, also now 69, and George Griffiths, now 67, along with Constantine “Omar” Boucher, were arrested at Oval Underground station in 1972 by a police unit known as “the mugging squad”, who accused them of stealing handbags.

The unit was run by Detective Sergeant Derek Ridgewell, who had previously served in the South Rhodesian (now Zimbabwean) police force, and was involved in a number of high-profile and controversial cases in the early 1970s – which led to calls for the Home Secretary to open an inquiry into his cases.

The “Oval Four”, as they were known, were convicted following a five-week trial at the Old Bailey, with Mr Christie also found guilty of theft of a handbag.

All four were jailed for two years, later reduced to eight months on appeal.

But Mr Trew, Mr Christie and Mr Griffiths finally had their convictions overturned on Thursday by the Court of Appeal in London, after a referral by the Criminal Cases Review Commission (CCRC) earlier this year.

Speaking outside the Royal Courts of Justice, Mr Trew urged anyone else who might have been wrongfully convicted as a result of Ridgewell’s misconduct to challenge their convictions, saying: “They should come forward and contact the CCRC.”

He added: “If you are innocent, don’t give up.”

Mr Boucher’s conviction was not referred, as the CCRC has been unable to trace him.

The Lord Chief Justice Lord Burnett, sitting with Mrs Justice McGowan and Sir Roderick Evans, said there was “an accumulating body of evidence that points to the fundamental unreliability of evidence given by DS Ridgewell … and others of this specialist group”.

The judge said it was “clear that these convictions are unsafe”, adding: “We would wish only to note our regret that it has taken so long for this injustice to be remedied.”

Mr Christie said in a statement: “I wish to thank everyone who supported us over the years in trying to right this miscarriage of justice, those who attended meetings, raised funds and distributed leaflets from various organisations.

“I would also like to thank my family and friends who have always supported us and known the truth about these convictions.”

Mr Trew and Mr Griffiths’ solicitor, Jenny Wiltshire of Hickman & Rose, welcomed the decision, but said it was “deeply concerning that it has taken so long to happen”.

She added: “Both the British Transport Police and the Home Office were warned about this police officer’s corrupt methods in 1973.

“They did nothing except move him a different unit, where he continued to offend, so that by 1980 he was serving a seven-year prison sentence for theft.

“But even then the police did not think to review his past cases. Had they done so, these innocent men’s lives would likely have been very different.”

He was then moved into a department investigating mailbag theft, where he joined up with two criminals with whom he split the profits of stolen mailbags before he was caught and jailed, eventually dying of a heart attack in prison in 1982 at the age of 37.

Mr Christie’s lawyer, Steven Bird of Birds Solicitors, said: “It is a travesty that these men have waited 47 years for exoneration for crimes that they did not commit. Justice has now finally been done.”

Last January, Stephen Simmons’ 1976 conviction for stealing mailbags was quashed after he discovered Ridgewell was later jailed for a similar offence, just two years after his own conviction.

Judy Khan QC, who represented the three men, said her clients’ case was “perhaps unprecedented” in that it had “already been cited in support of quashing another appellant’s conviction” before their names had been officially cleared.