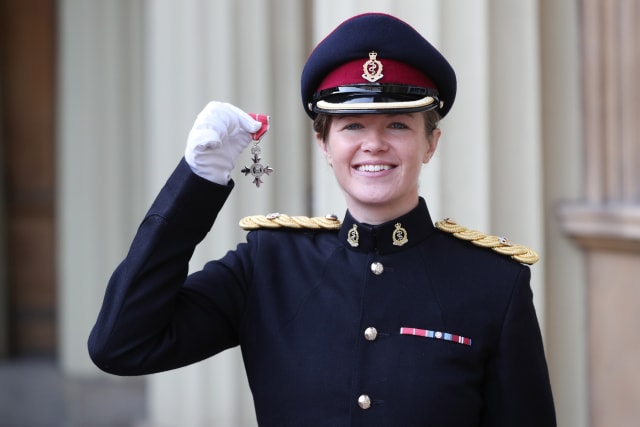 The Prince of Wales has told of his admiration for an Army major who led the first all-female group to cross Antarctica using muscle power alone.

Charles praised Major Nicola Wetherill and her record-breaking team of six as she collected an MBE at Buckingham Palace.

Major Wetherill headed the military’s Ice Maiden team for a gruelling 61 days from November 2017 until January 2018, when they walked 1,700km in temperatures as low as minus 40 degrees Celsius.

They carried all their own equipment, including sledges weighing up to 80kg.

After collecting her award, the Ice Maiden’s leader said the hardest part of the wintry expedition was the strain on her mental health.

Major Wetherill, who is part of the army’s medical corps, said: “The mental aspect was the hardest part.

“It was being in a very repetitive isolated environment, and coping with any disagreements.”

She “definitely” had doubts about whether the team would make it.

Major Wetherill said: “It’s about having these doubts and being able to deal with them, but as leader you can’t let the rest of your team know.”

She added: “We are surprised we are the first female team – it was 2018 when we finished.

“We ended up breaking another record, which was irrespective of gender.

“We were also the first novice team, with none of us having come to the Arctic before.”

On receiving the award, Major Wetherill said Charles told her he had “a lot of admiration” for the Ice Maidens.