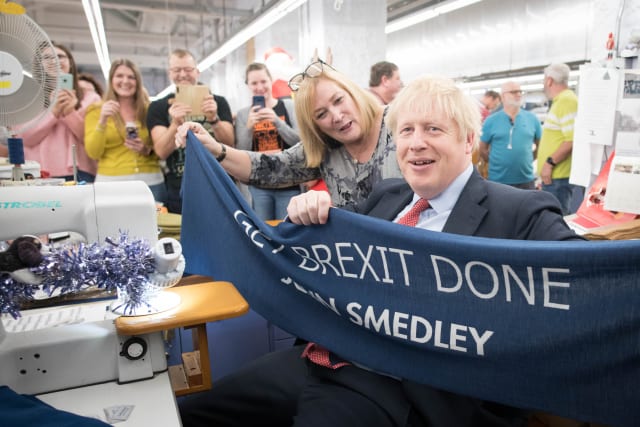 Boris Johnson has pleaded with voters to give him a House of Commons majority in seven days to help change the “punctured Parliament” he claims has frustrated his vision for Britain.

The Prime Minister repeated lines and jokes about the need to “get Brexit done” and said his deal could be brought back to Parliament “before you cook your Christmas turkey” if the Tories win on December 12.

Mr Johnson also joked during a speech to workers at a knitwear factory that the 635 Tory candidates “haven’t been dragooned, haven’t been lobotomised” in order to get them signed up to support his Brexit deal.

The PM did not travel on the bus, which led to shouts of “Boris, where are you?” from protesters, who included Labour activists.

Mr Johnson was given a tour of the factory floor and tried his hand at sewing.

He sat behind a machine and tried to sew a label on to a garment with “Get Brexit Done” on it.

“You missed,” he was told on his first attempt.

Mr Johnson replied: “I don’t want to get my finger.”

The PM had more success on his second attempt in getting the Brexit garment done.

Mr Johnson then addressed staff, telling them: “I don’t want to interrupt you for long as this is the run-up to Christmas and I imagine you’re in a production frenzy now making the beautiful jumpers and sweaters and knitwear and tasteful underwear I suppose, and all the things that’ll be under the trees of the nation this Christmas and being exported around the world.”

Mr Johnson reiterated his campaign claims as to why he wanted next week’s election, saying: “We just had to do it because we’ve got a broken Parliament, a Parliament that won’t do its job, like a broken down bendy bus jackknifed on the yellow box junction stopping the entire nation from making progress.”

The PM also said if Britain was a “super green supercar” then the “flat tyre” is the “punctured Parliament”.

He said: “All I’m asking is for your help to change that punctured Parliament on Thursday of next week and get us a working majority.

He added: “Seven days to unleash this country’s potential and get it surging forward again.”