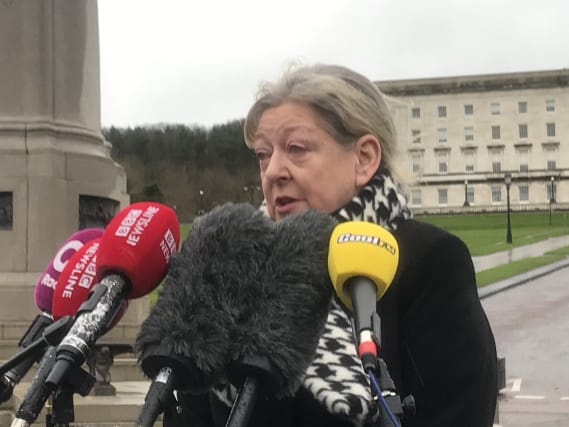 A trade union official said a meeting with Julian Smith over an escalating health crisis was “positive”.

However, Patricia McKeown of Unison cautioned that the meeting at Stormont House had been political in nature, and was not a negotiation.

Health workers in Northern Ireland have been taking part in waves of industrial action over pay and staffing levels.

There has been strike action as well as work-to-rule across the week, causing thousands of surgeries and appointments to be cancelled.

Speaking following the first meeting, Ms McKeown said it had been positive.

“I think there will be movement, obviously we have to wait to hear what the department and the employers (say), I don’t want to pre-empt those negotiations, but I think it was a positive meeting,” she said.

“It has finally got as far as the UK Government, we have had a positive meeting, we expect hopefully a positive response.”

On Wednesday Mr Smith described the ongoing absence of a health minister and devolved government amid the crisis as “unacceptable”.

He told the BBC that he was “extremely sorry” that the strike was affecting patients, families and workers.

Devolved government has been collapsed for almost three years following a breakdown in relations between the DUP and Sinn Fein.

In the absence of ministers, senior civil servants have been left to lead departments.

The Northern Ireland Secretary insisted he is doing what he can within his powers to “move this forward”.

“It is an unacceptable situation and that’s why I am saying I will do whatever I can within the powers that I have to help the Northern Ireland Civil Service move this forward, and that’s including speaking with the trade unions over the coming days,” he said.

He added: “This area of health is a devolved matter so the decisions have to be taken by the NI Civil Service, they are working in difficult circumstances because Stormont’s not running.

“But I am working with them to see if we can find a way through.”