Farage: Johnson will win a majority at the General Election 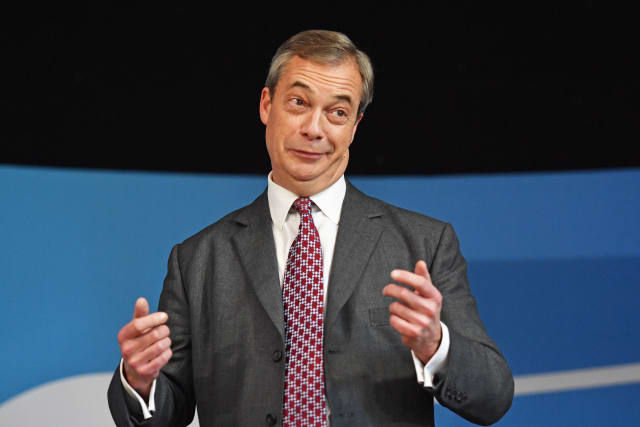 Nigel Farage says he would prefer Boris Johnson to be prime minister over Jeremy Corbyn – and that the Tory leader “will have a majority” after the election.

In an interview with the BBC’s Andrew Neil, the Brexit Party leader was asked who he would prefer to be in Downing Street – Conservative leader Boris Johnson or Labour’s Jeremy Corbyn.

He said: “Not Jeremy Corbyn, obviously. It is going to be Boris Johnson. I would prefer that to Jeremy Corbyn.”

The 55-year-old added: “He will have a majority, there is no question about that.”

The MEP faced the fearsome interviewer on the same day as turmoil broke in his ranks, with four MEPs dramatically leaving the party on Thursday to campaign for Mr Johnson’s Brexit deal.

But Mr Farage said Annunziata Rees-Mogg, sister to Commons Leader Jacob Rees-Mogg and one of those to walk out, was “wrong” to suggest the Brexit Party could put Britain’s exit from the European Union “at risk” by contesting Labour-held seats.

He countered by arguing it was the Tories, by contesting constituencies such as Doncaster, Barnsley and Hartlepool, where he said voters were “unlikely” to go blue, that were guilty of splitting the Leave vote.

Last month, Mr Farage opted to stand down candidates in 317 constituencies where the Tories had been victorious at the 2017 election, meaning Leave voters in almost half the country do not have a Brexit Party candidate to vote for.

Mr Farage was challenged on comments he had made in which he apparently urged Leave supporters to vote Tory “if you can bring yourself to” in seats where the Brexit Party are not standing on December 12.

“I’ve said don’t vote for Labour or the Liberal Democrats – this is very much a ‘don’t vote’ election,” he told the former Sunday Times editor, Mr Neil.

Mr Farage reiterated his stance that he could not vote for Mr Johnson’s exit terms under their current guise in the European Parliament and predicted “we will be back in crisis in six months” if it went unamended.

He warned that the Withdrawal Agreement (WA) would “hugely inhibit” the US trade deal that is so sought after by Eurosceptics – a deal which the former Ukip boss said he was comfortable with, even if it meant American chlorinated chicken hitting British supermarket shelves.

Mr Farage said: “I think the truth of it is, and the view of the Trump administration is, that the conversation you and I are having at the moment is probably only academic because, if the Withdrawal Agreement passes unamended after Boris has won this election, then the chances of us doing free trade deals with America or elsewhere would be hugely inhibited.”

A possible trade deal with Washington has incited fears that British consumers would be opened up to lower food standards, including the likes of chlorine-washed chicken and rat hairs being permitted in packets of paprika.

Mr Farage said it should be up to shoppers to decide what food they buy when asked whether he would approve of negotiating with the US over food standards.

“With the right labelling, of course. It is a matter of consumer choice,” he told the BBC.

Defending his past comments that Britain should move towards a “private insurance-based system”, he said that only applied to the country’s highest earners.

“My view is that wealthier people should be encouraged to take up private insurance to lift the burden off a system that is struggling to cope,” said Mr Farage.

“I want wealthier people to be able to opt-out. I wasn’t for one moment proposing those on lower incomes should take up private health insurance, of course I wasn’t.”

Presented with allegedly anti-Islamic comments made by Brexit Party candidates in Edinburgh South West and Birmingham Ladywood, Mr Farage said: “I’m sure if some idiots slipped through the net, then they would have been got rid of immediately.”