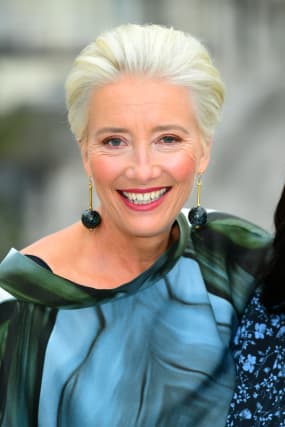 The star, 60, spoke outside the BBC Broadcasting House in central London on Thursday evening as part of Extinction Rebellion’s latest climate change protest.

Standing in front of a map of the UK claiming to show areas at risk of flooding by 2030, Dame Emma said: “And now earth lovers, to the weather…

“For those of you expecting a habitable future, we have some pretty gloomy projections for you.

“Climate crisis trends show an increased chance of warmer, wetter winters and hotter, dryer summers, along with an increase of frequency and intensity of extremes.

“Better wrap up warm, stockpile food and remember there is a surprising amount of food in the average household pet.

“Looking ahead we are on course to sail past our 1.5 degree centigrade target putting us on track for long lasting and irreversible change.”

“Looking at the edges, we can see an estimated 3,000 kilometres of our coastline receding, although that is great news for the Tory heartlands, which will soon be expecting sea views encroaching across the hills,” Dame Emma said.

“All the signs are telling us to act now, but as our chief adviser King Canute once said, never let a rising tide get in the way of a good election.”

The stunt was organised as part of the climate change protest group’s ‘Election Rebellion’ demonstrations across the UK.

Around 20 protesters gathered outside Broadcasting House in Portland Place, holding a banner that read Tell The Truth.

Some were dressed in diving equipment to illustrate their claims of a the threat of flooding in the UK in 2030.

Reading the forecast, Dame Emma said: “Taking a closer look at London we see that 23 underground stations are at significant risk of flooding, with 57 at high risk.

“These climate trends could bring chaos to the inner city, but with underground drivers being retrained as gondoliers there are promising signs the economy will stay afloat.