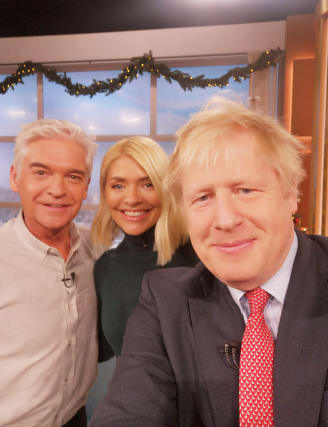 Boris Johnson has appeared on television using a Huawei smartphone, despite ongoing security concerns around the Chinese company.

Following an interview on ITV’s This Morning, the Prime Minister used what appeared to be a Huawei P20 – understood to be his own – to take a selfie with presenters Phillip Schofield and Holly Willoughby.

Willoughby said Mr Johnson reappeared after his interview on the programme and “he whipped his phone out” in order to take the picture.

The incident comes in the midst of a heated debate around the company and allegations of its close links to the Chinese state – critics have argued that Huawei’s telecoms equipment could be used to spy on people in the West – something the company has always denied.

It insists it abides by the laws of each country in which it operates.

The United States, which has placed trade restrictions on the firm, has previously suggested that future co-operation with other members of the Five Eyes intelligence-sharing partnership – the UK, Canada, Australia and New Zealand – could be jeopardised if the Chinese company was given a role in the UK’s 5G infrastructure.

On Wednesday, Mr Johnson said he would not compromise Britain’s national security over whether to give the telecoms firm a role in building the UK’s 5G network.

Speaking at the end of the Nato 70th anniversary leaders’ meeting in Watford, he said: “On Huawei and 5G, I don’t want this country to be unnecessarily hostile to investment from overseas.

“On the other hand, we cannot prejudice our vital national security interests, nor can we prejudice our ability to co-operate with other Five Eyes security partners, and that will be how – that will be the key criterion that informs our decision about Huawei.”

The Conservative Party refused to comment on the incident.

Huawei also remains the subject of a Government review into whether it should be allowed into “non-essential” parts of UK 5G infrastructure.

That decision is expected after the General Election.