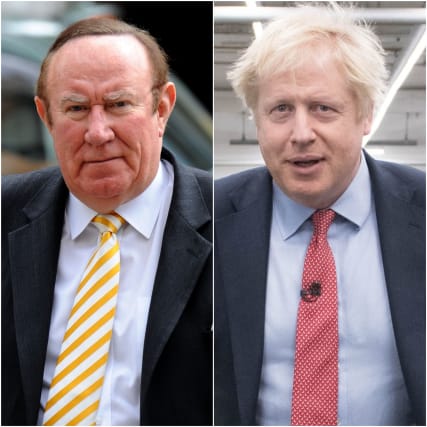 Andrew Neil has torn into Boris Johnson for refusing to commit to an interview on his BBC show.

Neil said that if the prime minister is expected to face the likes of Donald Trump and Vladimir Putin then he should be able to sit down for a half-hour interview with him.

Mr Johnson has been accused of “running scared” from scrutiny by avoiding in-depth questioning from the veteran broadcaster — even though rival leaders have taken part.

With less than a week to polling day, Neil challenged Mr Johnson to finally agree to an interview on the theme of “trust” and why voters have “deemed him to be untrustworthy”.

“Questions we’d like to put to Mr Johnson so you can hear his replies. But we can’t, because he won’t sit down with us.

“There is no law, no Supreme Court ruling, that can force Mr Johnson to participate in a BBC leaders’ interview. But the prime minister of our nation will, at times, have to stand up to President Trump, President Putin, President Xi of China. So it was surely not expecting too much that he spend half an hour standing up to me.”

Neil said leaders’ interviews had been a key part of the BBC’s prime-time election coverage for decades, adding: “We do them on your behalf to scrutinise and hold to account those who would govern us. That is democracy.

“We’ve always proceeded in good faith that the leaders would participate. And in every election they have. All of them. Until this one.

“It is not too late. We have the interview prepared. Oven-ready, as Mr Johnson likes to say.

“The theme running through our questions is trust, and why at so many times in his career, in politics and journalism, critics and sometimes even those close to him have deemed him to be untrustworthy.

“It is, of course, relevant to what he is promising us all now.”

Neil outlined policy issues on which he would question Mr Johnson, saying: “He vows that the NHS will not be on the table with any trade talks with America. But he vowed to the DUP, his unionist allies in Northern Ireland, that there would never be a border down the Irish Sea.

“That is as important to the DUP as the NHS is to the rest of us. It is a vow his Brexit deal would seem to break.”

“How can we expect Johnson to stand up to Trump or Putin if he won’t even agree to a half-hour interview with Andrew Neil?

“It’s bad enough that the voice of Remain has been excluded from tomorrow’s debate. But it’s even worse that right now Boris Johnson won’t be held properly to account for his lies and extreme Brexit plans.”

Earlier, ITV confirmed that Mr Johnson has refused to participate in their series of leader interviews with Julie Etchingham.

ITV said they contacted Mr Johnson’s press team on “repeated occasions” with times and dates, but that his team confirmed on Thursday that he will not be taking part.

However, Mr Johnson will go head-to-head with Labour leader Jeremy Corbyn in a BBC debate on Friday night.

“He’s running scared because every time he is confronted with the impact of nine years of austerity, the cost of living crisis and his plans to sell out our NHS, the more he is exposed.”