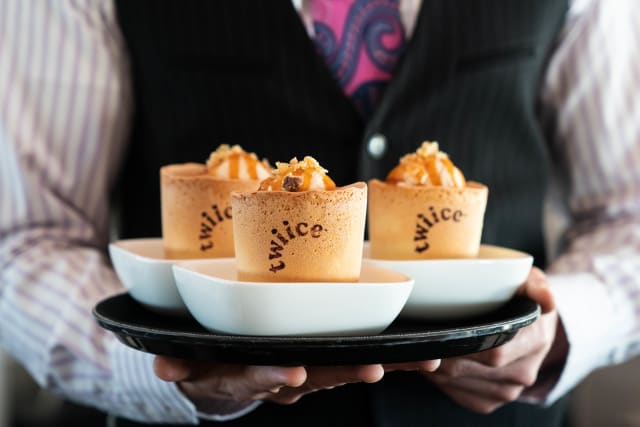 Air New Zealand has begun trialling a new innovation in its battle against waste – an edible coffee cup.

The cups are baked from a biscuit base, are vanilla-flavoured, leak-proof and can double as a dessert bowl.

Nike Chave, of the airline, said while the company – which serves more than eight million cups of coffee a year – has been using compostable, plant-based cups for some time, it was aiming to “remove these totally from landfills”.

“We’ve been working in partnership with innovative New Zealand company twiice to explore the future of edible coffee cups,” Ms Chave said in a statement released by the airline.

“The cups have been a big hit with the customers who have used these and we’ve also been using the cups as dessert bowls.”

Ms Chave says the airline would continue to trial the edible coffee cups and would work with twiice and others to explore options that could make it a viable long-term product for the airline.

Twiice says the cup will not crumble like a biscuit, and will “stay crisp at least as long as it takes to drink your coffee, and longer”.

“It’s terrific that Air New Zealand has partnered with us to showcase to its customers and the world that a little bit of Kiwi ingenuity and innovation could have a really positive impact on the environment while at the same time delivering a really cool and tasty customer experience,” twiice founder Jamie Cashmore said.

Starmer says Johnson won because Labour ‘made him look good’