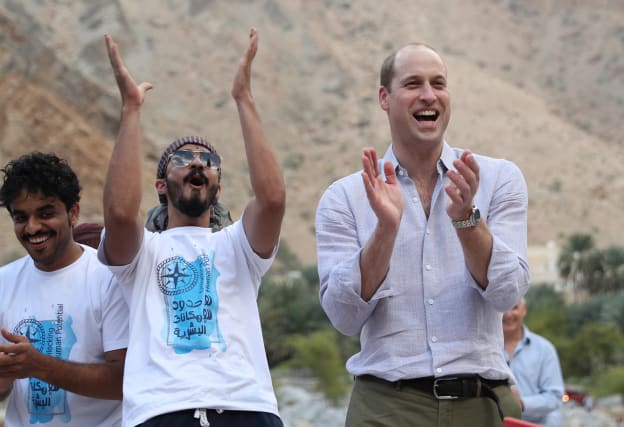 The Duke of Cambridge would be the “perfect” royal figurehead for the Outward Bound Trust after it severed ties with his uncle the Duke of York, a Middle East executive from the charity has said.

William’s ability to “bring people together” was praised by Mohammed al Zadjali, head of operations for Outward Bound Oman, as the duke met young people in the country supported by the organisation.

The Outward Bound Trust accepted Andrew’s resignation as its patron after his disastrous BBC Newsnight interview about his friendship with convicted sex offender Jeffrey Epstein.

A large number of charities and organisations associated with Andrew have distanced themselves from the royal after he faced criticism for showing a lack of empathy towards Epstein’s victims in his television appearance.

The Duke of York was also attacked for what was seen by many as a lack of remorse over his friendship with the disgraced financier, who took his own life in prison earlier this year while awaiting trial on sex trafficking and conspiracy charges.

After William joined a group of teenagers in a bridge-building team exercise in a rural part of Oman, Mr al Zadjali said: “The prince coming here today is a momentous occasion in these young men’s lives, they will remember meeting him forever.

“He has a natural ability to bring people together, he is a leader and can use his position to inspire the next generation of leaders wherever that may be.”

“He would be the perfect candidate to take over in the UK,” he said.

“It wouldn’t be up to me of course but of course it is a natural choice.”

In the stunning setting of the Wadi al Arbaeen – a palm tree-covered valley surrounded by mountain peaks – south of the capital Muscat, William knelt to hold the base of the makeshift bridge created from wooden poles.

The aim of the exercise was to develop communication, leadership and teamwork skills among the young men and when the precarious bridge was completed they let out a loud cheer.

William had travelled to the remote and picturesque area to experience rural life and began by meeting elders in the nearby village of Suwaih, who invited him to take off his shoes and join them on a carpet-covered open-air meeting space.

Outward Bound Oman instructor Abdul Rahman translated the Arabic of the elderly men for the duke, and said afterwards: “The duke wanted to know what life was like years ago compared to now and one of the elders told him they travelled by donkey.

“Roads were only built in this area in the 1980s and electricity didn’t arrive until the 2000s.”

William sat down to chat to some of the teenagers who were coming to the end of a four-day excursion to the mountains with Outward Bound Oman, a branch of the UK-based Outward Bound Trust which uses adventure activities to develop life skills in young people.

He said: “It’s great you are so involved in your futures here. As a generation, what are the biggest challenges for you?”

Some of the young men told him in the ever-changing job market in Oman they faced challenges of employability and being different from others, but Outward Bound was giving them the skills to stand out.

The duke added: “That’s great that you have this opportunity. It’s a great organisation and with the mentoring scheme as well, it’s really important.”

Earlier, William learned about the traditional and modern faces of the Oman fishing industry. He tried his hand at mending nets when he met a group of fishermen on a shingle beach near the Marina Bandar al Rowdha.

After being complimented about his stitching, he replied: “You are kind, I need to come and learn off you a bit more.”

William chatted to the men on a stretch of shore overlooked by an Omani government centre, where the duke had earlier donned a white lab coat and blue surgical-style gloves to join scientists testing the DNA of marine animals.

During his tour of the Ministry of Agriculture and Fisheries Marine Science Centre, where scientists are working with the UK Government’s marine science agency Cefas, he also looked through a microscope as he learned about the scourge of algae blooms in the waters off Oman.

The duke ended his four-day tour of Kuwait and Oman by having an audience with the ruler of Oman, Sultan Qaboos Bin Said Al Said at the Palace of Bait Al Baraka.