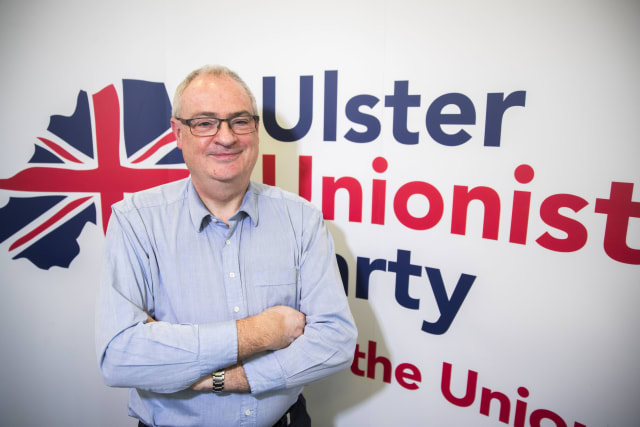 Pro-union voters must be offered an alternative to the politics of the Democratic Unionist Party, Ulster Unionist leader Steve Aiken has said.

Mr Aiken accused his unionist rivals of having “blown” the influence they had in the last parliament when their 10 MPs were involved in a confidence and supply deal to prop up the Conservative government.

He said at this election his party offers an alternative, a “positive progressive pro-union voice” in the House of Commons.

The Ulster Unionist Party was not represented at Westminster at the last parliament, having lost their two MPs at the 2017 General Election.

Speaking at the party’s election manifesto launch at the Stormont Hotel in Belfast, Mr Aiken said the December 12 election will decide the future direction of the United Kingdom.

He restated his opposition to Prime Minister Boris Johnson’s proposed Brexit withdrawal deal, describing it as “totally disastrous for Northern Ireland” and presenting a “very real and active challenge” to the union.

In the last parliament, Northern Ireland was represented by 10 DUP MPs, seven Sinn Fein MPs who did not take their seats and one independent, Lady Sylvia Hermon who is not standing this time.

Mr Aiken said Sinn Fein had been powerless, while the DUP had “blown” the influence their 10 MPs had had.

“They conceded a massive strategic own goal on the October 2 when they gave way on Boris Johnson’s regulatory border in the Irish Sea which paved the way for the nightmare deal that is now on the table,” he said.

“They had the monopoly on unionist opinion in the House of Commons for two years, yet it is hard to remember a time when pro-union politics was so damaged.

“That is why we must offer an alternative.

“Ulster Unionist MPs will offer a progressive pro-union voice in the House of Commons … and will stand strong against any attempts to annex Northern Ireland from the rest of the United Kingdom.”

Mr Aiken also restated his opposition to either a Boris Johnson-led government, or Labour leader Jeremy Corbyn in 10 Downing Street.

“There must be meaningful change to how we do business here to ensure that the mistakes of the past aren’t replicated,” he said.

“The upcoming talks process must not be viewed as simply a means of getting over a bump in the road.  It must be viewed as an opportunity to transform our politics and rebuild public confidence in the institutions.

“We must go back to the spirit of the Belfast Agreement and truly sharing power.

“The days of domination over one another must come to an end.”

He said, if talks fail again, then the Secretary of State must introduce direct rule.

“This farce cannot continue for another calendar year.

“If by mid-January there is still not agreement then direct rule must be implemented,” he said.

“We cannot just sit back while public services spiral into further crisis and deal with the fallout of Brexit with one hand tied behind our back.

“If politicians here aren’t willing to take up their responsibilities, then they should be relieved of their duties and direct rule minister put in place.”

The Ulster Unionist manifesto also calls for a healthcare emergency to be declared, money for more police officers, a call for a single education system, ambitious environmental action targets including for net zero carbon emissions by 2035 and opposition to the Historical Investigations Unit.