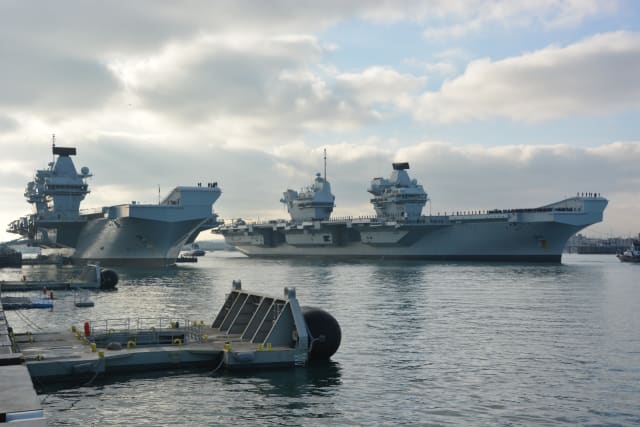 The Royal Navy’s two giant aircraft carriers have docked together, stern to bow, for the first time at their home base of Portsmouth.

HMS Queen Elizabeth arrived at the Hampshire naval base following a three-month deployment to the USA for test flights of its F-35B Lightning jets.

The 65,000-tonne warship manoeuvred into place alongside its sister ship, HMS Prince of Wales, which arrived for the first time at Portsmouth last month and will be commissioned later this month by the Prince of Wales and Duchess of Cornwall.

The Queen Elizabeth and its carrier strike group sailed from the UK in August to carry out the flight tests involving UK jets for the first time.

Commodore Steve Moorhouse, commanding officer of Queen Elizabeth, said: “Homecomings are always a special occasion, but to be returning to Portsmouth, with HMS Prince of Wales welcoming us home makes this a particularly special occasion.

“This has been an extremely successful deployment for HMS Queen Elizabeth. Embarking UK F-35B Lightning for the first time and integrating them within the carrier strike group is a significant milestone and we are well set for an equally demanding 2020 and our first operational deployment in 2021.”

Captain James Blackmore, commander of the air group for the UK carrier strike group, said: “The five-week period of Operational Tests with UK F-35Bs from the UK Lightning force was significant and historic.

“As the last pilot to fly Harrier from the deck of HMS Ark Royal in 2010, it filled me with tremendous pride to see UK fixed-wing aircraft operate once more from a British carrier.”

Major upgrade work has been carried out on the jetties at Portsmouth so that the two giant ships can berth next to each other.

During their 50-year service, the two 919ft (280m) long aircraft carriers can be pressed into action for various work such as high-intensity war fighting or providing humanitarian aid and disaster relief.