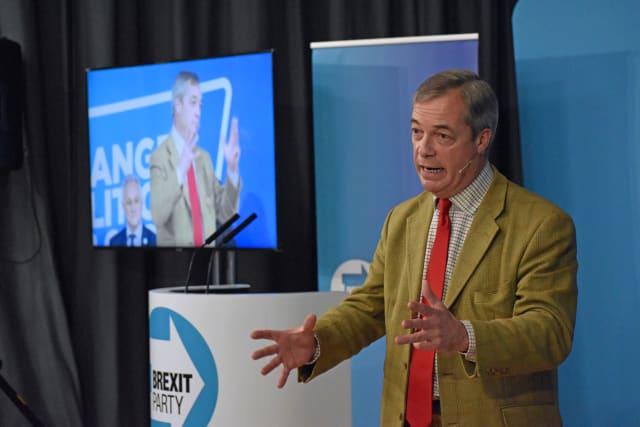 Nigel Farage visited a cafe, a pub and a battery firm while lending his backing to the Brexit Party’s candidate in Nottinghamshire’s Ashfield constituency, MEP Martin Daubney.

Speaking at a rally in Kirkby-in-Ashfield on Wednesday, Mr Farage questioned where Boris Johnson had been “hiding” in recent weeks and urged the Prime Minister to keep Britain out of a European Defence Union.

Mr Farage told party supporters that Nato had been the defender of stability and peace in Europe for 70 years but was now “directly under threat”.

Mr Farage told the rally: “Our position in this as a country is crucial. Here’s why – without us Nato won’t continue to work.

“But equally, without us the European Defence Union will not have sufficient military muscle to be significant.

“At the moment, Boris Johnson is on the fence.

“I want to say this on behalf of the Brexit Party – Brexit doesn’t just mean leaving the European Court of Justice, the single market, the customs union, it means leaving any nascent European army as well and we want Boris Johnson to start making that commitment.

“Whether he will or not remains to be seen, and he’s generally been in hiding, hasn’t he, for much of the last couple of weeks.”