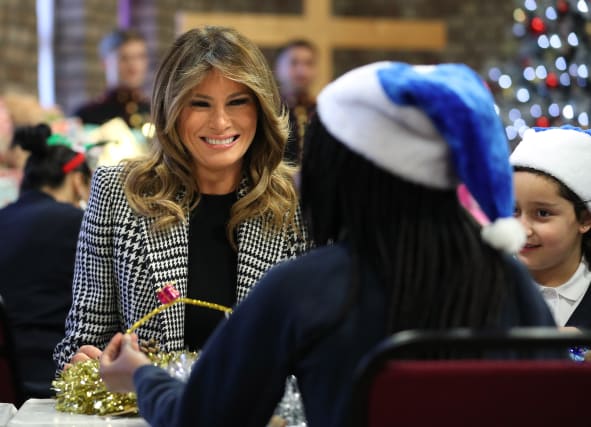 Melania Trump was serenaded with a rendition of Mariah Carey’s festive classic All I Want For Christmas Is You as she visited a Salvation Army centre in east London.

The US First Lady bobbed her head slightly as around 30 children from Baden Powell Primary School belted out the well-known Christmas song.

Wearing a black and white houndstooth check coat over a black sheath dress, the wife of US President Donald Trump appeared to say “bravo” as she congratulated the ensemble.

Mrs Trump beamed throughout the visit, commending the Christmas hat-clad youngsters on their festivewear and chatting more generally about the festive season.

The First Lady also joined US Embassy Marines to put gifts in bags to help with the Salvation Army’s annual present appeal for local families.

She placed a white frisbee with her Be Best logo into one bag, and a football into another.

Mrs Trump then handed out Be Best branded ornaments to children in the choir after they finished their performance, before leaving in her motorcade.

The First Lady was accompanied to Clapton by Suzanne Johnson, wife of US ambassador to the UK Woody Johnson.

Mrs Trump told children how she had never eaten a mince pie.

Isabelle Bates, 10, said: “Everyone was asking her random questions, what do you do for Christmas and that.

“We were talking about mince pies and she said she never had one but she was going to try one tonight.

“I thought she was really fun.

“There was a picture in school we saw and we were looking at it and she looked really grumpy. But she wasn’t.”

Her friend, Quiana Mullings, nine, added: “I’m gonna be honest and say her make-up was a bit much.

“It made her look sad but actually she was very happy.”