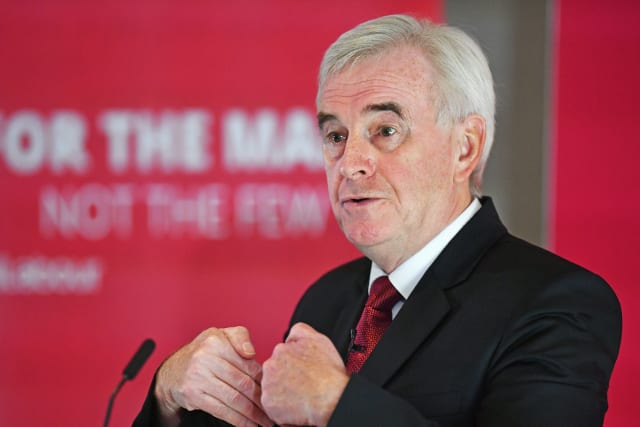 Labour’s John McDonnell has accused Donald Trump of having a “passing relationship with reality and truth”, but he insisted Jeremy Corbyn would work with the US president.

The shadow chancellor said “all the evidence” points to the NHS being on the table during trade talks with the US, despite Mr Trump’s denials that is the case as he landed in the UK on Tuesday.

An alleged plot to “sell off” the public health service to US corporations during a post-Brexit trade deal has been a key message of Labour’s campaign for the December 12 election.

Mr Trump insisted America wants “nothing to do with” the NHS, even if it was “handed to us on a silver platter”, as he arrived in London for the Nato summit.

But Mr McDonnell said on Wednesday that “all the evidence that we’ve seen has demonstrated objectively that it is”, despite the denials of Mr Trump and Prime Minister Boris Johnson.

Speaking during a campaign visit to Birmingham, Mr McDonnell said: “Donald Trump has a passing relationship with reality and truth sometimes.

“I believe in one instance he claimed he didn’t know what the initials NHS stood for.

“So the reality is the evidence is there and the anxiety that we have about the NHS under a Boris Johnson regime and his relationship with Trump causes us extreme concern.”

Mr McDonnell also said it was “encouraging” to hear Mr Trump say he is an “easy” person to get on with and that he could “work with anybody” in Downing Street.

To laughter, Mr McDonnell added: “After possibly another election.

“Obviously, Jeremy will work with leaders all over the world including Donald Trump, and we will ensure that whatever happens in the future we will look after the interests of our own people as well as others across the globe.”

Ahead of a Buckingham Palace reception for Nato leaders on Tuesday, Mr Corbyn had said he would tell the president US companies cannot play a role in running the NHS and nor can pharmaceutical costs rise.

But the event passed without the Labour leader getting a chance to confront Mr Trump.

Mr Johnson did, however, engage with the president during an off-camera meeting that night. Mr Trump said afterwards he had “enjoyed” the talks, during which they discussed “numerous subjects”.

The Tory leader will hope his campaign does not come off the tracks during the meeting of Nato leaders – including Mr Trump – in Watford on Wednesday.

Conservative officials are anxious for the president to avoid any outburst which could hamper their campaign – a wish that could prove tricky as he is set to take questions from journalists at a press conference.

The PM is reportedly swerving a lunch with Mr Trump at the summit and will send Foreign Secretary Dominic Raab in his place, with a clash over a press conference said to be the reason.

Mr Johnson will return to the campaign trail later on Wednesday afternoon and has announced plans to ramp up security at public venues against the threat of terrorism – requiring venues to assess the threat of an attack and take steps to prepare as part of their health and safety strategy.

The PM said: “It is no longer sufficient for public venues to prepare for accidental threats like fire.

“They need to reduce their vulnerability to people who seek to perpetrate violent acts, too.”

Elsewhere on the campaign trail, Labour vowed to end “rip-off Britain” as party research alleges the Tories have cost families nearly £6,000 a year by failing to curb rising bills.

By contrast, Labour says its plans to nationalise key utilities and increase wages will make households nearly £7,000 better off each year if it wins the December 12 election.

The Tories said Labour’s claim it would reduce living costs “defies belief”, while accusing the party of standing on a manifesto containing tax hikes for “ordinary hardworking people”.

Mr McDonnell vowed to “abolish poverty” as he highlighted the scale of inequality in the UK during the Birmingham speech, as Labour criticised the Conservatives for creating a “cost-of-living crisis”.