Johnson: We will stop talking about Brexit after January 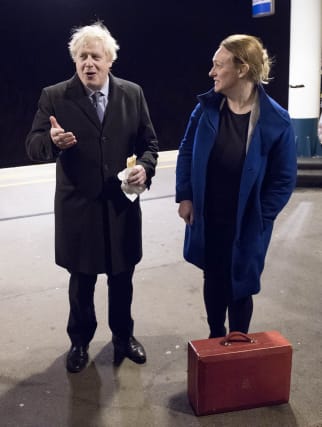 The Prime Minister has suggested that Brexit will no longer be talked about after January by which time he says the UK will have left the European Union.

Boris Johnson also denied that Conservative candidates were forced to sign up to his deal, describing the suggestion as “totally unfair”.

Labour leader Jeremy Corbyn has previously said Mr Johnson’s promise to “get Brexit done” is a “fraud on the British people”, adding that Mr Johnson’s deal is “just the beginning of years” of negotiations.

Mr Johnson, asked on ITV’s Peston if everybody will stop talking about Brexit after the end of January, said: “Yes, and now let me say something.

It was suggested to Mr Johnson that he could not achieve Brexit with a year, and it was pointed out to him how long it took to negotiate Theresa May’s deal and a Canadian free trade deal.

On the suggestion that Tory candidates were forced to sign up to his deal, Mr Johnson said: “I have not forced them, that is totally unfair, there was absolutely no lobotomy…”

Pressed on whether he did not say they could not be candidates, he said: “No, not at all.”

Last month, Mr Johnson said that all Tory parliamentary candidates have vowed to vote for his Brexit deal if he wins a majority at the General Election.

In an interview with the Sunday Telegraph, the Prime Minister said this pledge means that voters can be “100%” certain that a Conservative government will “unblock” Parliament and deliver Brexit.

Meanwhile, Labour’s John McDonnell has accused Donald Trump of having a “passing relationship with reality and truth” but he insisted Mr Corbyn would work with the US president.

The shadow chancellor said “all the evidence” points to the NHS being on the table during trade talks with the US despite Mr Trump’s denials.

Mr Johnson said the NHS was not discussed with the US president when the pair met for talks and he described claims about the NHS being used as a bargaining chip as “complete nonsense”.

An alleged plot to “sell off” the public health service to US corporations during a post-Brexit trade deal has been a key message of Labour’s campaign for the December 12 election.

Mr Trump insisted America wants “nothing to do with” the NHS, even if it was “handed to us on a silver platter”, as he arrived in London for the Nato summit.

But Mr McDonnell said on Wednesday that “all the evidence that we’ve seen has demonstrated objectively that it is”, despite the denials of Mr Trump and Mr Johnson.

Speaking during a campaign visit to Birmingham, Mr McDonnell said: “Donald Trump has a passing relationship with reality and truth sometimes.

“I believe in one instance he claimed he didn’t know what the initials NHS stood for.

“So the reality is the evidence is there and the anxiety that we have about the NHS under a Boris Johnson regime and his relationship with Trump causes us extreme concern.”

Mr Johnson said the NHS was not discussed with Mr Trump when the pair met, and asked if they spoke about the NHS, he told broadcasters in Milton Keynes: “I think everybody by now has rumbled all that for the complete nonsense that it is and the answer is no.”

The Prime Minister was earlier pressed about what he thought of Mr Trump personally, to which he replied: “I’ve of course had very good relations with the United States and any UK prime minister is there to ensure we protect the transatlantic partnership.”

Mr Johnson claimed it was “absurd” that others such as Mr Corbyn were “so viscerally hostile to the United States“, adding: “The President of the United States has been supportive of this country when the chips were down.

“When it came to the poisoning of innocent British people in Salisbury in Wiltshire, countries around that table today stepped up to the plate and expelled Russian spies.

“At the same time the leader of the opposition, Jeremy Corbyn, suggested that we should comply with Moscow’s wishes and send them samples from Salisbury so that they could go through their allegedly impartial tests.

“He took the Moscow line, countries around the table today supported the UK, particularly the President of the United States who stood shoulder to shoulder with us.”

Mr Johnson did not address a question about footage which appeared to show him and other Nato leaders mocking Mr Trump.

A huddle which included the Prime Minister and the Princess Royal was filmed apparently gossiping about the US president’s unorthodox style on Tuesday night, although Mr Trump is not mentioned by name.