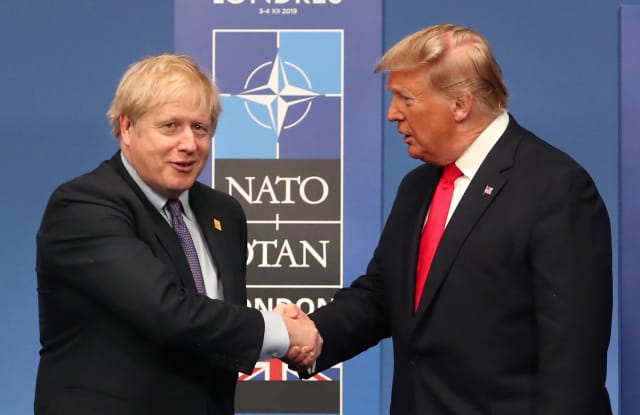 Boris Johnson has urged all Nato allies to spend at least 2% of their GDP on defence at the close of a summit beset by tensions over the future direction of the Western alliance.

In a rallying cry to members, the Prime Minister said countries cannot be “complacent” about the need to invest so the military group can continue for the next 70 years.

His comments came as Donald Trump dramatically cancelled his scheduled press conference, saying he had already done “so many” in the past two days.

The US president had earlier accused Justin Trudeau of being “two-faced” after footage of leaders – including the Canadian PM and Mr Johnson – emerged in which they appeared to mock Mr Trump at a Buckingham Palace reception.

Mr Johnson seemed unaware of the video, and deflected a question about Mr Trump’s role in the security of the west by talking only about the past record of the US.

“I certainly think that the United States is the guarantor of, has been a massive contributor to Nato, has been for 70 years a pillar of stability for our collective security,” he told a press conference at the Watford summit.

The PM also told reporters: “The UK has long argued that you can’t be complacent about that, you can’t remotely take that for granted.

“You have got to ensure that we continue to spend on our collective defence and that’s why we have made the case for 2% of GDP is the minimum Nato spend for every member.”

– Mr Johnson said foreign fighters have to “take the consequences” when he was asked whether they should be returned to the UK.

– Nato Secretary General Jens Stoltenberg said the leaders had committed to ensuring the security of their telecommunications infrastructure, including 5G, and would use only “secure and resilient systems”.

– The leaders agreed to the updated plan for the Baltic countries and Poland, Mr Stoltenberg said, despite Turkish threats to block it.

Mr Johnson appeared unable to resist bashing Labour during the press conference, saying the party wants to “destroy” Nato, at the summit held in the middle of the General Election campaign.

“There is a choice between those who want to strengthen Nato and those in the Labour opposition who actually want to destroy it, destroy Nato, this alliance that has kept us safe,” he said.

“I want to strengthen MI5, that keeps us safe. Jeremy Corbyn and the Labour Party want to install a home secretary who wants to disband MI5.

“I want longer sentences for violent criminals and to make sure that terrorists serve their full term, Mr Corbyn doesn’t agree with that.”

Simmering divisions had been on display on Tuesday after Mr Trump and Emmanuel Macron clashed over the French president’s suggestion the alliance was experiencing a “brain death”.

The US president said the comments were “very, very nasty” and insulting to other alliance members.

However, Mr Macron insisted he stood by the remarks prompted by Turkey’s offensive against the Kurds of northern Syria – seen as key allies of the West in the fight against the so-called Islamic State (IS) – after it was effectively given the green light by Mr Trump.

The PM, speaking on Wednesday, said Nato leaders recognised the “huge pressures” faced by Turkey in dealing with four million refugees from the conflict in Syria as well as the “terrorist threat” from the Kurdish PKK in Turkey.

“What we were all trying to do is understand Turkey’s plans for that stretch of northern Syria, what they want to do, how they see the future there and the way forward.

“What we want to do is to avoid any misunderstandings between allies within Nato about Turkey’s intentions and how that situation will develop,” he said.