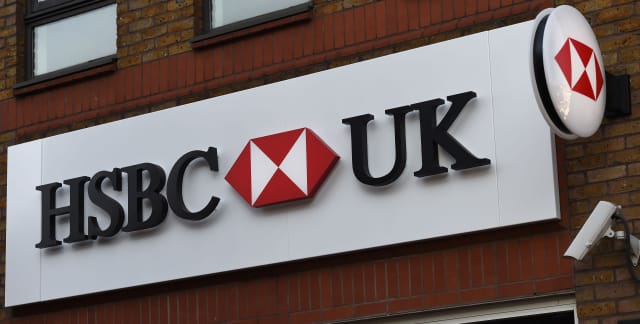 HSBC will impose a single overdraft rate of 39.9% on customers from March 2020.

The announcement comes at a time when households are stretching their budgets to cover Christmas spending.

It also follows a similar move from Nationwide Building Society – prompting finance experts to say that paying around 40% interest for going into the red could become “the new normal”.

The Financial Conduct Authority (FCA) has previously unveiled plans to clamp down on complex overdraft charging structures across the industry generally, with new rules requiring providers to show costs with a simple annual rate.

HSBC UK, which currently charges rates of 9.9% to 19.9% to some overdraft customers, said it will also remove a £5 daily fee for going into an unarranged overdraft and introduce an interest-free £25 buffer on Bank Account and Advance accounts, providing leeway for those going slightly overdrawn.

It said seven in 10 who use an overdraft will be better off or the same as a result of the changes, but declined to go into further detail about exact numbers.

HSBC UK also said it recently extended the use of real-time text messaging to alert all customers who go into their overdraft.

Madhu Kejriwal, HSBC UK’s head of lending and payments said: “By simplifying  our overdraft charging structure we are making them easier to understand, more transparent and giving customers tools to help them make better financial decisions.”

In July, Nationwide also unveiled a new single rate of 39.9% across its adult current account range. Its changes came into force in November.

The FCA previously said providers will be required to advertise arranged overdraft prices with an APR (annual percentage rate) to help customers shop around.

Helen Saxon, banking editor at MoneySavingExpert.com, said: “With both of the first banks to announce changes moving overdraft interest rates to around 40%, we have to wonder if this is the new normal.”

The FCA has previously said that it will actively monitor market developments.

But it argued the net effect will still be better for consumers – and increased competition between providers as a result of the changes would constrain any price increases.

Rachel Springall, a finance expert at Moneyfacts.co.uk, said: “It’s disappointing to see such a hike in overdraft charges but there may be more brands coming out in the coming weeks to announce changes too.

“We have already seen Nationwide upping its charges and these moves have been in response to the FCA’s ruling to ban fixed fees from April 2020.”

She continued: “This shake-up is designed to make things fairer and more transparent to consumers.

“Borrowers would be wise to scrutinise any changes to their current account and look to switch elsewhere if they find that the account has lost its shine.

“It only takes seven days to switch using the current account switcher service.”