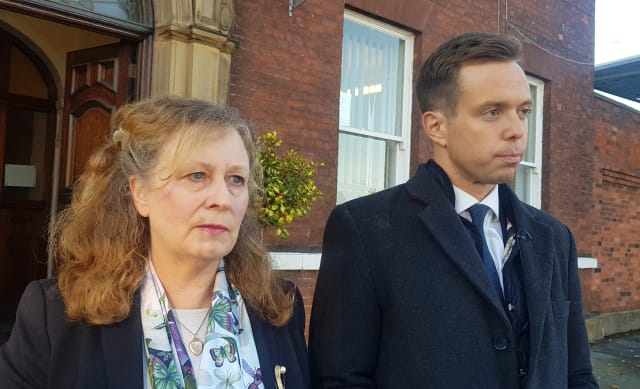 The family of a vulnerable man who was murdered by a drug addict has said that failures by a coroner and other authorities to undertake a “full and fearless” investigation into his death “has only deepened our distress”.

Christopher Laskaris, 24, was stabbed to death in his flat in the Hyde Park area of Leeds in November 2016 by a man who had only just been released on licence from a jail sentence.

His mother, Fiona, and sister, Cara, have campaigned since his death for answers about why Mr Laskaris was not properly diagnosed with autism and given more support in the community, where he was left open to “abuse and exploitation”.

The family also believe that police left him at risk when officers smashed in his front door in the days before Philip Craig killed him and then failed to make sure the flat was properly secured.

But West Yorkshire area coroner Jonathan Leach ruled both these issues were beyond the scope of the inquest into Mr Laskaris’s death, which concluded on Wednesday.

In a statement read by barrister Jake Richards outside Wakefield Coroner’s Court, the family said: “We are incredibly disappointed and angry that the coroner decided not to investigate the failure of local services to properly diagnose and assess Christopher, or investigate how he came to be living in a flat, without support, vulnerable to abuse and exploitation which ultimately — we believe, and have expert evidence which the coroner refused to hear supporting us — led to Christopher’s death.

“We have no answers as to why the police didn’t ensure Christopher’s door was appropriately secure.

ll we want are answers so Christopher’s death is not in vain and his legacy can be the protection of other vulnerable individuals.

“This allowed a drug-taking killer to simply wander into his property.”

The statement went on: “The failure of the coroner, the police, local services and the national government, including the Care Minister, to undertake a full and fearless investigation into Christopher’s death has only deepened our distress.”

The family, who launched a crowdfunding campaign the fund legal representation, said: “Christopher was a bright lovely boy, with so much to offer.

“He is loved and missed by us every day and we will have to endure the pain of his suffering and loss for the rest of our lives. All we want are answers so Christopher’s death is not in vain and his legacy can be the protection of other vulnerable individuals.”

Mrs Laskaris, who lives in Surrey, was in tears on Monday when she described the “living nightmare” of the years of battles she had as she tried to get appropriate diagnosis and support for her son.

Philip Craig was jailed for life for Mr Laskaris’s murder in May 2017 and told he must serve a minimum of 25 years.

Craig had been released from prison on licence in February 2016.

He was recalled to prison three months later after he was charged in relation to allegations of domestic violence but was released again in September 2016 when the charges were dropped.

Recording a verdict of unlawful killing, Mr Leach ruled that, to the knowledge of the private probation provider, Craig had not done anything that justified his further recall to prison.