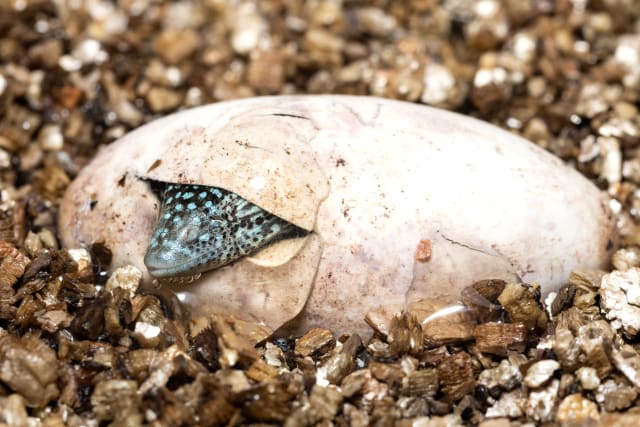 An endangered species of lizard has been bred in a UK zoo for the first time.

The species is classed as endangered on the International Union for Conservation of Nature’s Red List of Threatened Species.

There are just 70 of the lizards in captivity across the world.

Tim Skelton, curator of reptiles and amphibians at Bristol Zoo Gardens, said: “This is a real first as no other zoo in the UK has managed to breed blue-spotted tree monitor lizards.”

The lizard eggs had been kept in an incubator for five months at a constant 31C (87.8F).

When fully grown, they will measure 43in (110cm) from the tip of their noses to the end of their tails.

Keepers are unlikely to know for certain what gender they are until they reach 18 months old.

Adam Davis, senior reptile keeper at the zoo, said: “They are such striking, eye-catching animals and these hatchlings are really active so it will be great for visitors to watch and learn about them.”

Mr Davis oversees a European breeding programme for the species, which he described as “vital to their survival”.

“So little is known about these animals in the wild – their natural history is still largely a mystery,” he said.

“The breeding programme aims to ensure a healthy population in European zoos and to do everything we can to better understand this species.

“We hope now that, having bred two, we can go on to breed more and help sustain the population of blue-spotted tree monitor lizards into the future.”

Blue-spotted tree monitors were only discovered in 2001, in tropical forests on the island of Batanta off the coast of Indonesia.

The species, which is at risk largely because of the international pet trade, was listed as endangered in 2017