Donald Trump visit: What we have learned so far 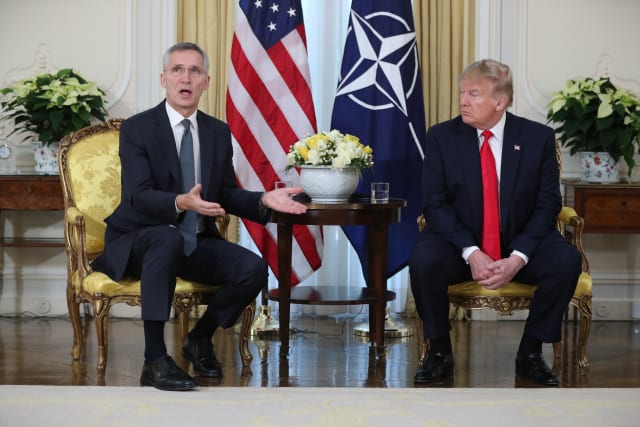 Never a man to stick to the script, Donald Trump’s visit to the UK has already been peppered with revelations, petty feuds and the usual dose of chest-beating.

Here is what we have learned about Mr Trump’s current world view over the last few days.

The US president has long complained that America pays too much into Nato and reportedly mulled over leaving the organisation completely but, having apparently single-handedly increased other signatories’ contributions by 130 billion dollars, it seems he is now a big fan.

– Trump is not happy with Emmanuel Macron

Now he is in Team Nato, Mr Trump cannot take the French president’s recent comments that the organisation is “brain dead” lying down.

“It is a very, very nasty statement,” he said, adding: “You have a very high unemployment rate in France. France is not doing well economically at all.

“They have had a very rough year. You just can’t go around making statements like that about Nato.”

“It is very disrespectful,” he said, before claiming: “Nobody needs Nato more than France.”

– Trump is spoiling for a trade war

The US president has threatened France with a raft of taxes on its imports in response to its proposed financial services tax – something Mr Trump seems to consider an affront to national pride.

“But they’re our companies, they’re American companies, I want to tax those companies. They’re not going to be taxed by France.”

He threatened to tax French wines “and everything else”, including engineering giant Airbus.

The FTSE slumped to its lowest level in two months in the wake of the revelations.

– Trump does not want the NHS

Mr Trump has apparently forgotten remarks he made this summer that “everything should be on the table” in post-Brexit trade talks with the US, including the NHS.

Perhaps wary of any allegations of meddling, the US president has vowed to stay out of the UK elections, saying: “I don’t want to complicate it.”

But he added Boris Johnson was “very capable and I think he will do a good job”.

When asked if he could work with Labour leader Jeremy Corbyn, he said: “I can work with anybody. I’m a very easy person to work with.”

Although he later added: “I know nothing about the gentleman.”

– Trump does not know the Duke of York

Despite being photographed together on several occasions, the US president claimed he is not an acquaintance of the royal.

“I don’t know Prince Andrew but it’s a tough story. A very tough story,” he said.

Putting aside any involvement from Kurdish forces on the ground, Mr Trump is taking credit for the defeat of Islamic State (IS).

“We’ve defeated the Isis caliphate, nobody thought we could do that so quickly. I did it very quickly. When I came in it was virtually 100% (of Syria) and I knocked it down to zero,” he said.

He also played up the killing of Isis leader Abu Bakr Al-Baghdadi and boasted: “We have the oil, and we can do with the oil what we want.”

An ardent climate change sceptic and still intent on pulling the US out of the Paris Agreement, Mr Trump was apparently less dogmatic with nature-loving Prince Charles.

Following tea with the Prince of Wales and the Duchess of Cornwall at Clarence House, he told ITV’s Good Morning Britain he “totally listened” to the prince on the issue.

Mr Trump said: “He wants to make sure future generations have climate that is good climate as opposed to a disaster, and I agree.

“I did mention a number of things, I did say the United States right now has among the cleanest climates.”