Britain ‘stuck in the pits’, says Johnson during Formula One visit 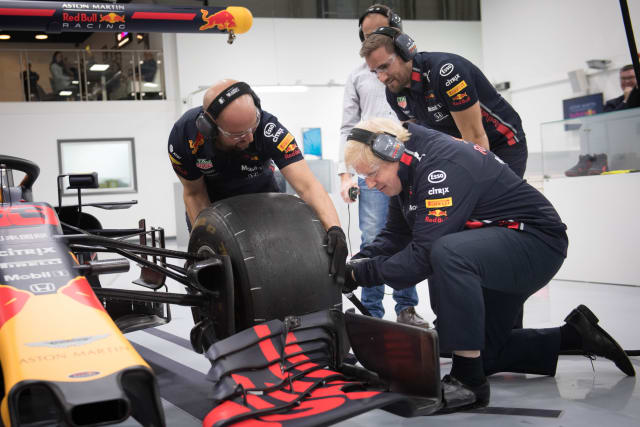 Boris Johnson has claimed Britain is “stuck in the pits” and pledged to get it “back on track” during an election campaign visit to Red Bull Racing.

But the Prime Minister almost came unstuck as he lagged well behind the Formula One team’s pit crew when he tried his hand at changing a car tyre.

Ahead of his pit-stop experience, Mr Johnson declared: “This whole country is stuck in the pits because of this blocked Parliament.

“What we need to do is change the wheel and get it back on track.”

When he was shown what to do, Mr Johnson remarked: “Is that it?”

His first attempt saw him change a tyre in 17.7 seconds – well short of Red Bull’s record of 1.82 seconds.

He improved to 16.6 seconds on his second attempt.

Mr Johnson joked: “It may have taken 16.5 seconds but it’s taken three-and-a-half years to change this paralysed Parliament.”

The Mirror chicken was earlier stood near the venue in Milton Keynes to welcome the Prime Minister but did not attempt to cross any roads to get close to him, with security monitoring its movements.

Mr Johnson was then shown the company’s F1 cars and was encouraged by a photographer to sit in one of them.

The Prime Minister replied: “You would literally have to prise me out.”

He also toured a workshop and joked to staff: “Where’s the Pirelli calendar?”