What is Nato, how much does it cost and what do leaders think of it? 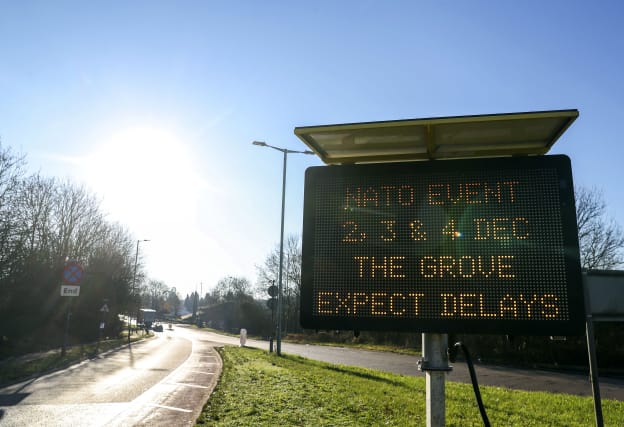 Nato leaders are meeting this week at the Grove Hotel in Chandler’s Cross on the outskirts of Watford.

Here, the PA news agency has a look at the military bloc, what Donald Trump and others think of it, how much money members of Nato contribute, and where the UK’s main political parties stand.

The North Atlantic Treaty Organisation was formed in 1949 to prevent a resurgence of nationalism and militarism in Europe after two world wars and to deter the Soviet Union’s expansion.

Its ranks have swelled to 29 member nations who agree to mutual defence in response to an enemy attack.

They pledged in recent years to bring defence spending to at least 2% of each country’s GDP by 2024.

– How much does the UK spend?

The UK has met Nato’s 2% target every year since its introduction in 2006.

For the last seven years, the UK has been the second highest spender in Nato, spending 60.4 billion dollars on defence in 2018.

The US, meanwhile, has spent more than twice as much on defence than the rest of Nato combined in each of the last seven years.

Aside from the UK and the US, the other countries meeting the 2% target are Greece, Poland, Latvia and Estonia.

While Nato Europe have increased spending by more than 25 billion dollars in this period, Nato North America have reduced their expenditure by nearly 100 billion dollars.

– How does Donald Trump feel about Nato?

The US president has expressed concern about the cost of Nato, and has been unhappy at how much the other 28 members contribute.

In his State of the Union address earlier this year, he said that the US had been “treated very unfairly by friends of ours, members of Nato” over a period of years.

During his presidential campaign he called the alliance “obsolete” and criticised other members whose security he thought was being subsidised by the States.

However, he has since U-turned on that stance, to the relief of many, saying: “I said it was obsolete. It’s no longer obsolete.”

– What about French President Emmanuel Macron?

Mr Macron has said Nato leaders must have a discussion about the future of the military alliance and how ties with Russia can be improved.

He recently described the organisation as “brain dead”, a comment that was criticised by others within the alliance.

He expressed regret at the two previous Nato summits focusing “only on how to alleviate the financial cost for the United States”, and said the bloc really needs to focus on what it is about.

– Where does Boris Johnson and the Conservative Party stand on Nato?

At the weekend, Mr Johnson said if he wins the General Election there will be a major Integrated Defence, Security and Foreign Policy Review, and whilst making the announcement he said Nato has been the foundation of European security since 1949, adding: “We need to modernise it rather than abandon it.”

Foreign Secretary Dominic Raab said Nato remains the “cornerstone of our European security”, and writing in the Sunday Telegraph, he said: “Nato needs to adapt to tackle new threats like cyber-attacks, as well as maintain its focus on defeating Daesh.

“But, that means all of its members paying their way, reinforcing Nato’s operational capabilities, and forging an even stronger transatlantic unity of purpose.”

– And what about the Labour Party and Liberal Democrats?

Like the Tories, Labour has committed to renewing Trident – at a cost of no less than £31 billion – and to honouring the Nato pledge of allocating 2% of GDP to defence spending.

The Lib Dems say they will build on the UK’s “proud record” of international leadership through the EU, UN, Nato and the Commonwealth by promoting values of freedom and opportunity for all.