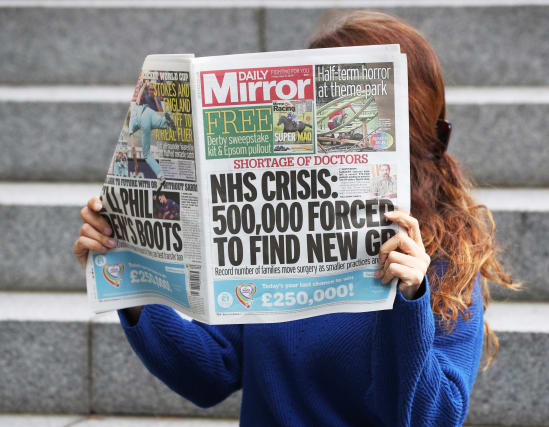 Daily Mirror publisher Reach has said it is no longer in talks to buy some titles from JPI Media, which owns the i newspaper and The Yorkshire Post.

Reach, which also owns the Daily Express, said it was in talks to buy some assets in July but told investors on Friday that it is “no longer in active discussions” about acquisitions.

Shares in Reach leapt higher in early trading after the company reported a 4.4% decline in revenue for the five months to November 24, as the rate of decline improved from 6.6% in the same period in 2018.

It said trade during the period was “steady” and has continued to be in line with its expectations.

Like-for-like print revenues across the business slumped by 7.3%, which also reflected an improvement on an 8.2% decline a year earlier.

Meanwhile, digital sales jumped 14% over the five-month period, up from 9.3% growth in the previous year.

The company said its performance in the second half of the year has been buoyed by “good progress” on a number of digital initiatives.

Reach hailed “strong audience growth” across both its national and regional titles during the period, which it said has provided it with the “confidence” to expand into new areas.

Cash generation was strong during the period and it now expects a net positive cash balance at the end of the year, it added.

Reach chief executive Jim Mullen said: “Since joining the business in August, I’ve been impressed by the strength of Reach’s national and regional brands, the quality of our content and the wide geographic distribution of our products through both print and digital channels.

“I’ve also been encouraged by the wealth of talented and inspirational staff working in the business.

“We are working to complement our audience reach with a significant depth of customer insight and data that will allow us to build an intelligent, relevant and trusted content business for the long term.”