Johnson concedes only 31,000 new nurses will be recruited under Tory plans 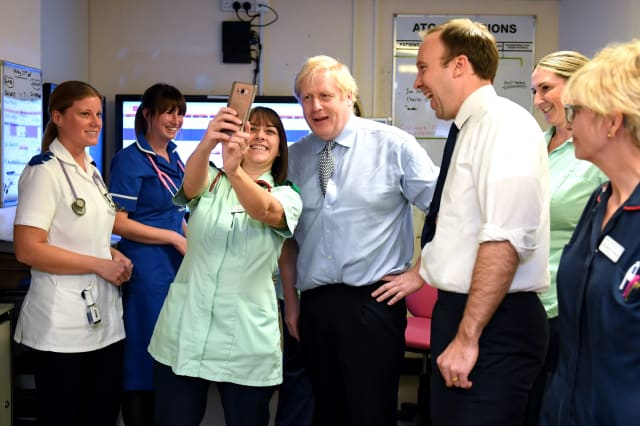 The Prime Minister has conceded that the Conservative manifesto pledge for “50,000 more nurses” actually only involves recruiting 31,000 new staff.

During an LBC phone-in on Friday morning, Boris Johnson was challenged on nursing numbers by host Nick Ferrari and caller Janet from Sunderland, a nurse close to retirement.

Mr Johnson said: “I do understand the controversy around this. There are 19,000 that are currently in nursing at the moment… and we thank them very much.”

He added: “The risk is they will leave the profession and we’re putting in the funds to make sure that they stay but there a further 31,000 that we wish to recruit.”

Mr Ferrari said: “You’ve misrepresented the figures… they’re not new are they?”

Mr Johnson said: “No, that’s correct… what I said is more nurses.”

In March, the Royal College of Nursing said since the Government scrapped the bursary for nursing students in 2017, the number of students taking nursing degree courses has dropped by almost 1,000 and applications have fallen by 30%.

The Royal College of Nursing also highlighted figures on Thursday which show there are currently 44,070 nursing vacancies, based on Government and healthcare provider data.

On the “40 new hospitals figure” which has been challenged during the campaign, Mr Johnson said it is “20 new hospital upgrades, 40 new hospitals will be built, I know there’s also controversy about those figures, but I’m absolutely proud to defend them”.

He added: “Forty new hospitals will be built as a result of the decisions that we’re taking.”

Mr Ferrari added: “But again you misrepresent the figures, why do you continually do this Mr Johnson?”

Mr Johnson replied: “Because I think people obviously try to turn things around on us and say we’re not making the investments we’re making.”

Mr Ferrari said: “There are four new sites, the others are revamped and putting workers in it.”

Mr Johnson said: “Let me give you an example, in my own constituency (Uxbridge and South Ruislip) we have a fantastic hospital – Hillingdon Hospital – we’re going to rebuild it, it’s going to be totally new.

“In your conception, is that a new a hospital or is that an old hospital that it is being rebuilt? My view is it is a new hospital.”

Asked in a sentence to tell Janet why she should stay working in the NHS, Mr Johnson said: “It’s not just about shiny new buildings and fantastic investment in infrastructure, and we’ll do it at a record pace and we can do it because we have a strong economy. It’s also about investing in people.”

Janet was then asked if she will stay in her job, and replied: “You have done nothing to convince me to get up and go to work on Monday, not at all.”

Mr Johnson also said he would “walk out” of trade talks with the US if it wanted the NHS to be on the table.

Speaking on LBC radio, he said: “The NHS is not for sale and under no circumstances will this Government or any Conservative government do anything to put the NHS up for negotiation in trade talks or privatising or anything like that.

“I can tell you that were the United States or any other country to insist on that as a condition of talks, we would simply walk out.

“It is perfectly obvious as leader of this country that if any government was to be so mad as to go down that route then they would never be elected.”

On the NHS being a part of trade talks, Mr Johnson said: “If actually, you read that stuff it was pure Bermuda Triangle stuff from the Labour Party because there was no evidence of that at all that the UK government was wanting to sell the NHS or to parlay the NHS in trade talks. It was absolutely not substantiated.”