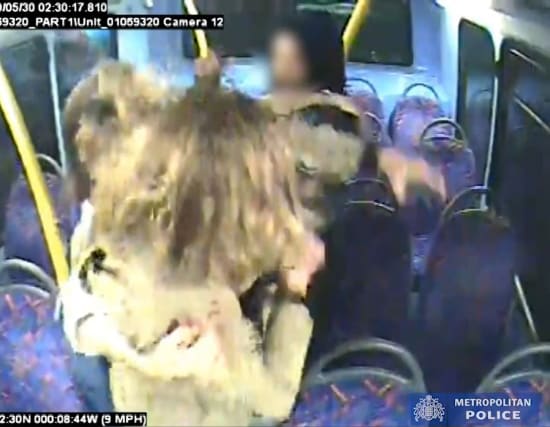 One of two young women attacked by a group of teenagers on a bus has told how the couple were subjected to homophobic comments and “harassed because of who we were”.

Melania Geymonat and Christine Hannigan were targeted by a group of teenagers while on the top deck of a bus at 2.15am on May 30, less than 10 seconds after the couple boarded the bus.

CCTV of the incident showed the pair were surrounded, hit with coins, punched in the face several times and subjected to sexual gestures while travelling on the top deck of the N31 bus in north London.

On Thursday, three teenage boys – aged 15, 16 and 17 – admitted using threatening or abusive words or behaviour against the two women shortly before trial.

However the 17-year-old, who cannot be named due to his age, has contested that he was hostile towards the women based on their sexual orientations.

Both Ms Hannigan and Ms Geymonat, whose full name is Ms Geymonat-Ramirez, gave evidence behind screens in court on Friday.

Ms Hannigan said they were physically cornered by the teenagers and were “harassed because of who we were”.

She said: “We were clearly together in a romantic sense, we were being affectionate.

“It is pretty intimidating being cornered and making homophobic comments.”

She added: “You feel embarrassed being targeted for your sexual orientation.”

The court heard Ms Hannigan and Ms Geymonat were returning from a date when the teenagers surrounded them.

“They wanted us to show them how lesbians have sex,” Ms Hannigan continued.

“They said ‘show us’ and I don’t remember if it was on its own or part of a larger phrase but the words were said.”

When asked whether the teenagers were being aggressive or annoying, Ms Hannigan replied: “I think they were being both.

“They got up from their seats to surround us on the top deck of a bus, which is in of itself aggressive.”

Prosecutor Saira Khan previously said the teenagers saw the women as “some form of entertainment” which was why the 17-year-old was throwing coins at the pair.

David Wood, representing the 17-year-old, said although his client threw coins and made a kissing gesture at the couple, the action was not based on their sexual orientations.

Mr Wood suggested that the boys may have approached the two women as a form of hitting on them.

“I would not describe what they were doing as hitting on us,” Ms Hannigan replied.

Mr Wood then contested how reliable Ms Hannigan’s memory was.

He said: “The extent to which they were being aggressive or targeting you because of you being on a date with another woman, is that actually true in your mind?”

She re[plied: “I think it’s the definition of targeting.”

Ms Hannigan later said “at least three coins” were thrown at them and marked the start of the incident becoming physical.

“I engaged them only after I realised one of the boys had started throwing coins,” she said.

“They were being extremely aggressive verbally and then they made it physical.

“I felt cornered and it was pretty scary and someone was getting physical as a result of it.”

Ms Hannigan said that she gave the boy throwing the coins a warning, but when it happened again “it was a step too far” and she reacted and approached the 17-year-old.

Ms Hannigan said: “It turned into a fight because they were being physically aggressive with us.”

“It turned into a fight because you threw the first punch,” Mr Wood said.