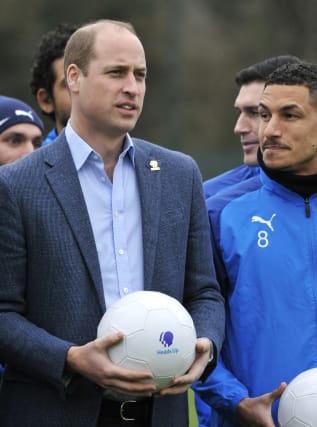 The Duke of Cambridge has been talking about the impact of racism on professional footballers’ mental health as part of the Heads Up campaign.

The issue of racism in football has come to the fore after recent incidents in both the international and domestic game.

Bulgaria were sanctioned by UEFA after their fans’ racist abuse of England players in a Euro 2020 qualifier in October, with the game being stopped twice by the referee.

Last month, an FA Cup qualifier had to be abandoned after Haringey Borough and Yeovil Town players walked off in the 64th minute, when racist abuse was hurled at Haringey footballers.

This week Liverpool and Netherlands midfielder Georginio Wijnaldum said he would walk off the pitch if racially abused.

William raised the topic while speaking to West Brom’s first team, who are currently flying high at the top of the Championship after a 4-1 win over Bristol City on Wednesday.

Greeting the Duke, himself an Aston Villa fan, there was good-humoured leg-pulling by club chief executive Mark Jenkins who told how club captain Chris Brunt had “played well against Villa”, in the past.

Midfielder Brunt, who has played more than 400 games for the Baggies, replied: “I wasn’t going to mention that.”

Out on the training pitch, Gareth Barry told the prince players had become “more aware” of how to better handle mental health, while midfielder Jake Livermore said “it’s definitely going in the right direction”.

England international Livermore, who has become an Albion regular since arriving from Hull City in 2017, lost his newborn son in 2014.

Talking to the No 8 and other players about mental health awareness, the duke said: “The stats are bad about men and mental health, really bad.

“Girls are pretty good, but guys are really bad at talking about it.”

He added: “It’s also not just about the footballing community but about guys who are out there watching… trying to get guys to be a bit more open about it.”

The duke then asked: “Do things like social media criticism – does that bother you, does that get to you guys?”

Former England international Barry, who has battled back from a serious knee injury, said: “That’s how football has changed from when I first started, to now.

“The social media, the younger lads have had to deal with it and learn about it.

“In football, especially, they’re trying to educate the young boys coming through, how to deal with it and try and take positives.”

The duke said: “I know it’s slightly different but it must have the same impact – can we talk about racism?

“How bad is it at the moment playing-wise, do you guys feel it at all?

“Is it happening over here, week-in, week-out?”

Livermore replied: “Previous clubs I’ve played for, have had their fair share of issues.

“I think the boys here are quite a together group, we stick together.

“But we all know someone who has gone through it.”

William replied: “That’s what worries me as well, is that you guys have to essentially carry that with you.

“You’ve already got the pressures of playing that weekend.

“You’ve got to worry about getting that right and you’re getting added criticism from people, unfairly.

“That must weigh on your mind, be a burden, and it also must make you feel: ‘Why is that happening to me, why me?'”

Livermore said: “Of course, I think it’s important for us because a lot of people look at us.

“It’s massive if we can show we don’t stand for that.”

William as president of the Football Association, is spear-heading the Heads Up campaign, which is using the popularity of football to get across the importance of mental health, particularly among men.

Men are three times more likely to take their own lives than women, with suicide the most likely cause of death for males under the age of 45.

Both have each lost loved ones to suicide in the last couple of years, and the duke asked about the effects of those bereavements.

Morrison said: “I was on a pre-season tour, got informed he had taken his life, and then – we’ve got a job to do, and you’re just trying to get on with it.”

For Austin, he found out his loved one had taken his own life the Friday before a game.

“I was speaking to my wife on the phone all the way up (to the game) asking questions,” he said.

“He seemed sociable, worked for himself – he came to family barbecues and parties, he was like the life and soul.

“But then we spoke and scratched the surface.

“That big bubble, that front that we have, that we don’t speak, that must have been what he was going through.”

William also spoke to young academy players aged 13-16 about how they were being taught about maintaining good mental health.

Anyone needing support can also text ‘HeadsUp’ to 85258 to connect with a trained crisis volunteer.