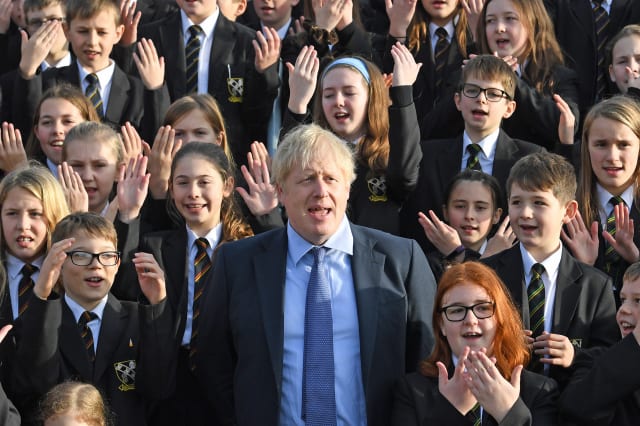 The shock hung parliament result two years ago should remain “evergreen” in the memories of those opposed to Jeremy Corbyn being in charge of Britain, the Prime Minister has warned.

A leading poll has predicted the Conservatives could be on course for a 68-seat majority after the December 12 election.

But Boris Johnson said there were “no luxury” votes and pointed to Theresa May’s troubles during the 2017 snap election.

When Mrs May called the election, some polls had her 21 points ahead of Labour and the former home secretary was thought to be coasting towards a victory before election night confirmed a hung parliament.

Polling company Survation predicted the result correctly, as did YouGov’s MRP analysis – the same poll that on Wednesday put Mr Johnson on course for a comfortable victory next month.

But, speaking before the poll was released, Mr Johnson said Tory supporters and those opposed to Labour’s Mr Corbyn being in Downing Street must ensure they vote for his party.

He told The Spectator, the magazine he used to edit: “The memory of 2017 is evergreen and people should be in no doubt that their vote matters.

“There are no luxury votes in this election, if you want to prevent a Corbyn/Sturgeon coalition you must vote for the Conservatives.

“If you want to get Brexit done then you must vote for the Conservatives otherwise, believe me, we’ll be back at the same situation we were in in 2017.”

Responding to the YouGov predictions, Chancellor Sajid Javid insisted the party would fight against complacency after the positive polling for the Tories.

On a visit to Darlington, he said: “I’m not interested in any polls except the one that’s going to happen on December 12.

“We are going to go out there and fight for every single vote.”

Mr Johnson also told the right-leaning magazine that he was against the austerity programme of the David Cameron and George Osborne era.

It is the first time Mr Johnson, who was in City Hall as mayor of London at the time of the budget cutbacks, has publicly made the comments, according to The Spectator.

The PM said: “I remember having conversations with colleagues in the government that came in in 2010 saying I thought austerity was just not the right way forward for the UK.”

It was austerity, along with the 2016 European Union referendum result, that convinced Mr Johnson the remedy for Britain’s societal woes was investment in “infrastructure and education and technology”.

“After 45, almost 50 years of EU membership, people were feeling that parts of the UK were simply being ignored,” he added.

“What I want to do, and that’s why I find this whole thing so frustrating, is get on with a programme of levelling up.

“A programme of uniting the country.

“I want to see change.

“I want to see that change in regions and towns that have been neglected.”