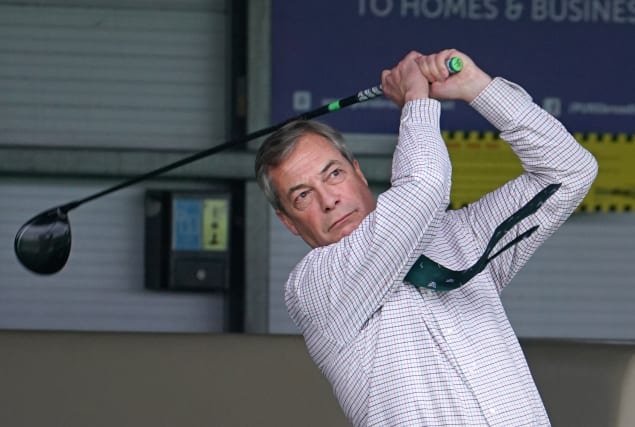 Brexit Party leader Nigel Farage has said suggestions Labour could change its campaigning strategy are “almost an acceptance that they have lost the election”.

He was speaking after the BBC reported that Labour insiders had said that the party has so far overestimated the threat from the Liberal Democrats and underestimated the chances of Leave voters switching from Labour to the Conservatives.

The new plan is designed to appeal to those who voted for Brexit, and to try to convince them that Labour is not attempting to stop Brexit by offering another referendum, the BBC said.

But Mr Farage told supporters in Hull that the rumoured move suggests that Jeremy Corbyn’s party is “in trouble”.

Speaking at a golf driving range, he said: “I think the truth of it is, they realise they are now fighting a defensive battle, they know they can’t win the election.

“This is now a defensive strategy to try to hold the seats that they have held for decades, it’s almost an acceptance that they have lost the election.”

Mr Farage said he feels that a Tory majority in next month’s election is inevitable, and that the role of the Brexit Party will be to hold Boris Johnson to account.

Speaking about Labour’s campaign thus far, he said: “Their manifesto launch was not the success that it was back in 2017, since then they have come out pledging tens of billions.

“Everything is going to be free – free iPhones and who knows what’s next.

“They’re fighting a defensive strategy and they want to try in Leave seats to get the argument off Brexit with ranting conspiracy theories about the National Health Service and what Donald Trump might do, despite what the Donald (Trump) said on this.

“They’re in trouble. That’s what this change of direction says.”