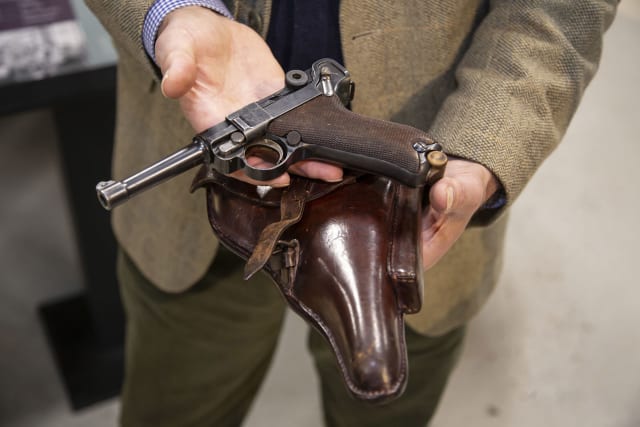 A museum is appealing for information about a First World War German-issued Luger pistol that was handed in during a police firearms amnesty.

The gun was made in 1911 and is thought to have been taken as a souvenir by a British soldier during the advance at Cambrai in November 1917.

It was recently handed in to Wiltshire Police who noted its connection with the great tank advance 102 years ago and donated it to the Tank Museum in Bovington, Dorset.

Now staff there want to trace its history and are appealing for any information about it.

An inscription scratched into the leather holster is the only clue. It reads: “Souvenir of the Big Advance at Cambrai November 1917”. The words “To Alice from HUD, Jany 21 – 18” also appear.

Museum curator David Willey wants to find out who took the Luger – model 1908 – so its story can be fully told.

“The Battle of Cambrai on 20th November was a hugely important moment in the history of the Royal Tank Regiment and is still celebrated today,” he said.

“It was the first ever large-scale and effective use of tanks in warfare, with almost 400 fighting tanks that advanced without any prior bombardment so the enemy had no warning.

“The tanks ripped through the German defences, proving that the decision to persevere with the development of the tank was the right one.

“After advancing for about six miles, the British were halted and later the Germans launched a counter-attack.

“This gun was probably captured by a British soldier during that incredible advance.

“To be able to identify the soldier would be wonderful, and means we have another story to tell to our visitors.

“Often these relics became family heirlooms and we’d love to trace the family that it belonged to so we can perhaps find the records of the man who brought it home as a souvenir.

“We are incredibly grateful to Wiltshire Police for recognising its historic importance and for donating it to us.”

The Pistole Parabellum – or Parabellum-Pistole and commonly known as just “Luger” – was based on a design first patented by Georg Luger in 1898 and was produced until 1948.

In 1908, the German army adopted the 1908 model, which included a four-inch barrel and was the Germans’ principal gun for the war, during which more than two million were produced and used.