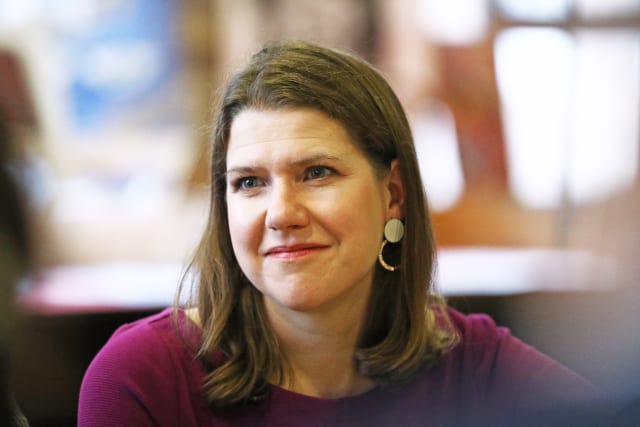 Liberal Democrat leader Jo Swinson had to fight back tears as she opened up on the role of her recently deceased father in her political career.

Ms Swinson had to compose herself by sipping water after being asked during a television interview about her father’s pride if he had lived to see her become the youngest and first female leader in the party’s history.

Her father Peter, who had been living with blood cancer for 10 years, died last year – 12 months before his 39-year-old daughter won the race to succeed Sir Vince Cable as party leader.

Her voice cracking with emotion, Ms Swinson told ITV’s Tonight programme that her father would “have loved” to have seen her success.

In an interview to be broadcast as part of the programme’s party leadership interviews, the former minister then took a drink of water before apologising for the delay in answering the next question.

Asked what her father would have been saying to her “on a tough day”, Ms Swinson replied: “He would have said ‘Just go for it’.”

Ms Swinson said her father was a “good sounding board” during her political career.

The Scot was just 21 when she first stood for the Lib Dems in the 2001 general election, having taken on ex-Brexit secretary David Davis in Haltemprice and Howden in east Yorkshire.

Questioned on the role her father would have played in the current campaign if he was still alive, Ms Swinson said: “Well, I think what he’d always do, when I did an interview, he’d always text me, or we’d have a conversation afterwards, and he’d give me good feedback. And, you know, he was a good sounding board.”

Ms Swinson also admitted that the party had “got it wrong” during the coalition government years by failing to stand up against the bedroom tax and the decision to rip-up its 2010 manifesto pledges and support a hike in tuition fees.

She voted in favour of both the bedroom tax policy and the increase of university fees to as much as £9,000 per year.

“You can always look back with hindsight, and say, actually, you know, that’s something that we just should never, never have let through,” she told ITV.

But she also added that the tuition fees reforms, as well as Lib Dem positions on education funding, had helped those from poorer backgrounds.

“What I would say is that we won the battle for schools funding, particularly, to help the poorest pupils,” Ms Swinson continued.

“That was billions of pounds worth of investment, really targeted. And, that’s where you make the biggest difference.

“So, although I absolutely think we got it wrong on tuition fees, because of what we’d said we would do, if you actually look at the outcome of the policy, that we designed, more people from low-income backgrounds, went to university, because we made sure that they would get extra bursaries, and extra support.”

The interview with Good Morning Britain’s political editor, Ranvir Singh, is due to be broadcast at 7.30pm on Thursday.