Heseltine: Boris Johnson is the most flexible politician of modern times 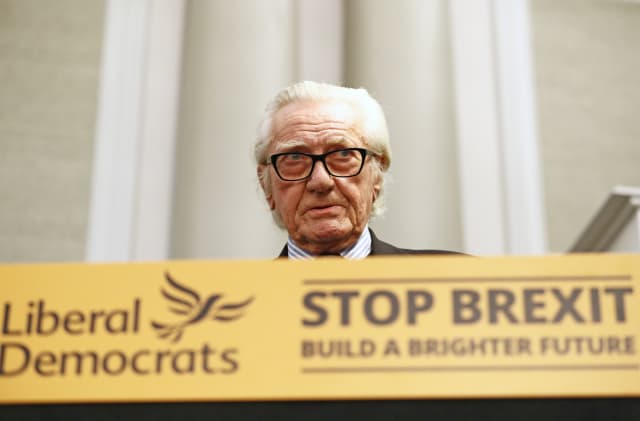 Although he remains a member of the Conservative Party, Lord Heseltine had the party whip withdrawn in May after he said he would vote for the Liberal Democrats in the European parliamentary election.

On Tuesday, he urged voters to back the Lib Dems at the General Election, or former Tory MPs such as David Gauke, Dominic Grieve and Anne Milton, who are standing as independents after they had the whip removed for backing efforts in the Commons to stop a no-deal Brexit.

At a Lib Dem press conference in central London, Lord Heseltine was asked if he thought Mr Johnson was a “liar”, to which he replied: “I actually quite like Boris. He makes me laugh.

“I’ve worked with him over the years when he was mayor of London. But he is the most flexible politician of modern times.”

Earlier, in a wide-ranging speech, Lord Heseltine made an impassioned case for Britain’s place in Europe, and of immigration to the UK.

He lambasted the Tory party’s campaign and said: “They don’t tell you the truth, either, about the regulations that they want to get rid of.

“They don’t tell you the truth about the immigration that they need in order to sustain the livelihood and civil life and happiness for everyone in our country.

“None of these things. They simply pander to the language and emotions that underline human prejudice across the world.

“In America, it’s the Mexicans and the wall. But in Europe, it is the foreigner and Brussels.

“Be warned about the message and the messengers who portray this insidious injection into the body politic of British democracy.”

He added: “There is one thing on which I profoundly agree with Boris Johnson. This is the overarchingly most important election of modern times.

“The sort of society we want to bequeath for the younger generation.

On the Union, he said: “I do not in any way countenance the break-up of the United Kingdom.

“I tell you, you vote for Brexit and you will see the repercussions in Northern Ireland and in Scotland, and we will be the poorer as the fracture of the United Kingdom proceeds in a way that is all too likely.”