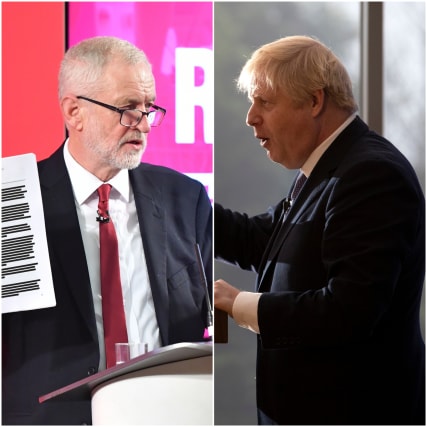 Labour and the Tories clashed over the NHS on Wednesday, with Jeremy Corbyn producing what he said were 451 pages of “uncensored” government documents which showed the NHS would be “on the table” in trade talks with the US.

Meanwhile, Boris Johnson insisted he had not broken his no-drinking vow – as he sipped cider.

Here are some of the highlights of Wednesday’s campaign trail:

– Labour and Tories continue to clash over the NHS being ‘up for sale’ in a US trade deal.

Jeremy Corbyn produced what he said were 451 pages of “uncensored” government documents which, he said, showed the NHS would be “on the table” in talks with the Trump administration.

But the Tories hit back, accusing the Labour leader of “out-and-out lying” – deliberately taking passages out of context from documents which had been publicly available online for weeks.

Boris Johnson described the Labour claims as “total nonsense”, insisting: “The NHS is not on the table in any way.”

– Mr Johnson and Mr Corbyn will not be taking part in the BBC’s seven-way election debate.

The debate is due to take place on BBC One on Friday at 7.30pm, and Chief Secretary to the Treasury Rishi Sunak will attend for the Tories, while shadow business secretary Rebecca Long Bailey will represent Labour.

But for the other two main parties, leader of the Liberal Democrats Jo Swinson and leader of the SNP Nicola Sturgeon will both feature.

– Nicola Sturgeon set out billions of pounds worth of demands as the price for her party’s support.

Ms Sturgeon insisted there is “every chance” the SNP will hold the balance of power at Westminster after the General Election.

She wants NHS spending south of the border to grow so it is at the same level in Scotland, where it is currently £136 per person higher.

The extra money that would go to Holyrood as a result of that investment would allow the NHS in Scotland to have a budget of more than £17 billion by 2024-25, the party has calculated.

– Nearly 700,000 people applied to register to vote on deadline day.

A total of 659,666 applications were submitted on Tuesday, according to Government figures.

It is the largest volume of applications submitted in a single day since registration data was first published in June 2014.

Mr Johnson pulled a pint of Rattler, which he tried to pronounce in a Cornish accent, at Healey’s Cornish Cyder Farm and then appeared unable to resist sampling it.

He told watching press: “I’m not allowed to drink anything… but I can have a sip as long as everybody understands that this is not properly…

“This is not breaking my vow – I’m not allowed to drink until we get Brexit done but I’m going to have one small sip.”

Labour leader Jeremy Corbyn quote-tweeted Boris Johnson’s claim that “Our NHS will never be for sale”, saying “this did not age well”, after he produced unredacted documents relating to a possible post-Brexit trade deal with the US.

Video of the day

Jeremy Corbyn claims he has evidence the Tories will put the ‘NHS up for sale’.