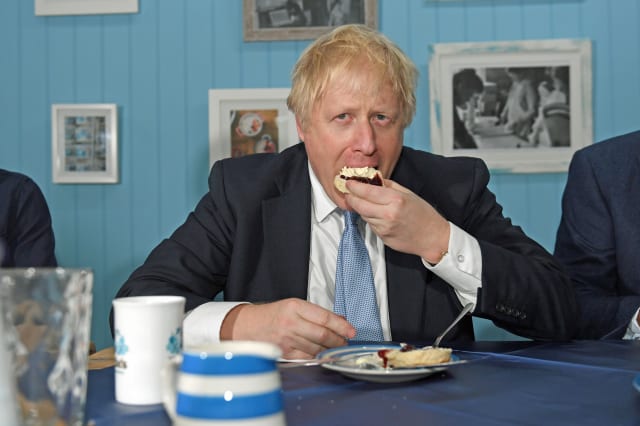 Boris Johnson has revealed his stance on an issue that divides the nation – whether to put cream or jam first on a scone.

On a visit to Rodda’s Cornish Clotted Cream factory near Redruth in Cornwall, the Prime Minister lathered jam onto his scone before dolloping cream on top, saying he believed the preserve to be more “adhesive”.

Mr Johnson said he was glad to have conformed to the Cornish way as he tucked into a cream tea with staff, but confessed: “My mind went a total blank as I was trying to explain which way round it went and I literally couldn’t remember, so I guessed. Gut instinct.”

He asked how the company copes with “the anti-obesity stuff”, saying: “Clotted cream, with the best will in the world, is not brilliant for your waistline.”

Mr Johnson toured the factory and then took to the production line where he was joined by Tory environment minister George Eustice, who is seeking re-election as the MP for Camborne and Redruth.

The pair – donning blue hair nets and white coats – packaged pots of cream, becoming slightly overcome by the production line as they raced to place the tubs inside packaging.

Mr Johnson earlier visited Healey’s Cornish Cyder Farm, near Truro, where he sampled some cider, as he took his General Election campaign to Cornwall.