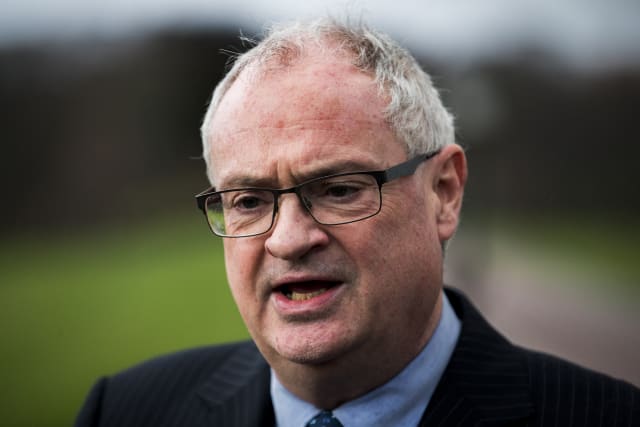 He pressed Julian Smith during a meeting at Stormont House on Tuesday amid growing waiting lists and staff walkouts across the health and social care system.

Almost 300,000 people in Northern Ireland are on a waiting list for a first appointment with a consultant, according to Department of Health figures which emerged earlier this year.

There has not been a Stormont health minister in place for over two years since devolved government collapsed in January 2017 following a breakdown in relations between the DUP and Sinn Fein.

Numerous rounds of talks to resurrect the Northern Ireland Assembly have ended without success.

“As our waiting lists continue to grow with close on, by some reckoning, 300,000 people on the waiting lists in Northern Ireland, our health system is in an absolute crisis,” Mr Aiken said, accompanied by his party colleague Doug Beattie.

“This wouldn’t be tolerated anywhere else in the United Kingdom. Right now we are asking the Secretary of State to make sure that we install a direct rule health minister now.

He expressed his frustration at the impasse.

“What we are hearing on the doors is the crazy waiting lists need tackled; our schools running out of money, that needs tackled; the fact that many, many thousands of people are facing a welfare cliff edge in March and we need to get mitigations in to protect them, that needs tackled; and we have Brexit coming down the tracks, and we have nobody prepared to go into work in the building behind us,” he said.

“We are ready and willing to do that. We want all parties though to properly commit to moving beyond the stalemate we are in.

“That is the only way forward and once the election is done and dusted, we have to remember how hard it was to get here, how hard it was to reach the Good Friday Agreement, and that the only solution we really have to solving our difficulties is to compromise and embrace powersharing again.”

“I want a Northern Ireland health minister immediately, we need politicians who have been elected by people here to go to work,” he said.

“There are difficult issues involved in these negotiations but none of them are more important than the fact that far too many people are waiting for far too long to see a doctor.”

Addressing calls to resume talks to see Stormont re-established after the election, Mr Aiken said there must be “meaningful commitment to reform”.

“We cannot be going back into reinforced failure like we were before, there must be commitment to making things work in Northern Ireland again, we can’t continue the way we have been going,” he added.