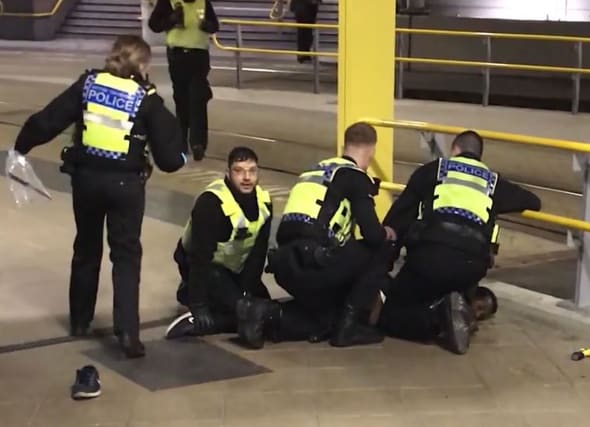 Mahdi Mohamud, 26, raised the fillet knife and walked up behind unsuspecting James Knox, screaming “Allahu Akbar!” and “Long live the Caliphate!” as he stabbed his victim repeatedly in the back, shoulders and head.

He then turned the knife on Mr Knox’s companion, Anna Charlton, slashing her across the face after the couple, in their 50s, randomly crossed his path heading for a tram platform shortly before 9pm last December 31.

Pc Ashleigh Williams, 27, and her colleague Marsha Selby, 28, along with two tram staff confronted Mohamud, who “like an animal” was “fixated” on stabbing and slashing, witnesses said.

The suspect was pepper sprayed before seconds later Pc Tom Wright, 27, arrived along with Sergeant Lee Valentine, 31, who shot Mohamud with his Taser.

But the barbs of the 50,000 volt shock gun got stuck in the knifeman’s thick coat and failed to paralyse him.

Before he could reload the knifeman ran along the blood-spattered platform charging at the officers with the weapon.

Sgt Valentine was stabbed in the shoulder before the suspect was wrestled to the ground and arrested.

A second kitchen knife was found in his waistband.

Mr Knox suffered 13 injuries including a skull fracture while Ms Charlton’s right lung was punctured and she suffered a slash to her forehead that cut down to the bone.

The defendant, a Dutch national from a Somali family, had arrived in the UK aged nine and became radicalised online, Greater Manchester Police (GMP) said.

Detained under the Mental Health Act the day after the attack he was later found fit to stand trial.

He also admitted one count of the possession of a document or record likely to be useful to a person committing or preparing an act of terrorism, a manual titled, “the seven most lethal ways to strike with a knife”.

Mohamud had left the home he shared with his parents and brothers in Cheetham Hill, Manchester around 8pm on December 31.

He walked the mile to the busy city centre train station where he launched the attack, arriving shortly before 9pm and being captured on CCTV covering the station, next to Manchester Arena, the scene of the May 2017 suicide bombing which killed 22 people.

Footage showed him behind Mr Knox when he raised the knife and launched the attack with swift downward strokes, before attacking Ms Charlton.

Officers arrived and there was a brief a stand-off before the failed shot with the Taser and Mohamud ran at the officers with the knife.

Sgt Valentine said: “One of the things for me, obviously when I’ve landed on top of him being so close to his face to be literally like looking in his eyes and he’s like – there’s nothing there.

Mohamud was sectioned under the Mental Health Act the following day and taken to a secure mental health facility where he is currently detained.

He was deemed fit to be interviewed on February 19 and charged on May 19.

Police later recovered a large amount of what GMP called “counter-terrorism mindset material”, including images and the document about how to carry out knife attacks.

Detectives say the planning for the attack began towards the end of 2017, when he had visited family in Somalia, with the defendant downloading radical hate material including speeches by Anwar al-Awlaki, the infamous US-born Islamist hate preacher, since killed in a drone strike in 2011 in Yemen.

Mohamud was known to mental health services but was not subject to a care plan at the time of the attack. Some years before he had been sectioned after voluntarily attending a hospital ward.

He had no criminal record and had been an engineering student at university but did not complete his degree and was unemployed and single.

Prime Minister Theresa May later joined the BTP in commending emergency services after the incident.

The four BTP officers and two tram staff all received BTP chief constable’s commendations. Alison Morgan QC, has begun opening the case for the prosecution before Mohamud will be sentenced later.