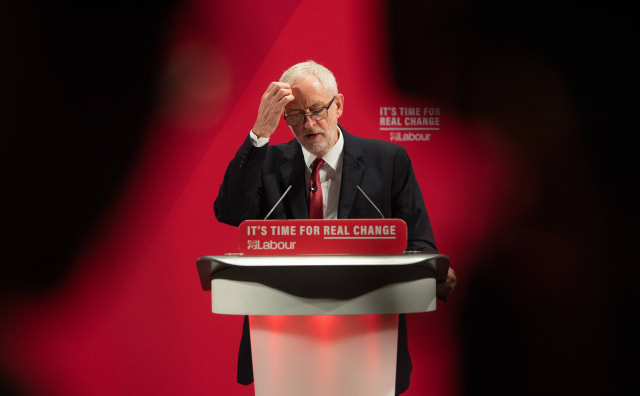 Jeremy Corbyn will try to steer his party’s campaign back towards the NHS today after a bruising day in which he was accused of not being fit to be prime minister by the UK’s Chief Rabbi.

The Conservatives will also want to move the focus onto their agenda again after the party was accused by the Muslim Council of Britain of “denial, dismissal and deceit” with regards to Islamophobia within its ranks.

The Labour leader is facing pressure to apologise to the Jewish community after failing to when pressed during a 30-minute grilling on the BBC by veteran journalist Andrew Neil on Tuesday evening.

Shadow defence secretary Nia Griffth said she is “ashamed” that the party has been dogged by accusations of anti-Semitism and said Labour now needed to apologise to the Jewish community.

Meanwhile, Scottish first minister and SNP leader Nicola Sturgeon is expected to warn “there is worse to come” if the Tories win the General Election, at the launch of the party’s manifesto in Glasgow.

Ms Sturgeon will urge the next UK Government to up health spending to £136 per person, a total of £35 billion extra – which would equate to an extra £4 billion for Scotland’s NHS.

She will also detail her plans for negotiations with a Labour minority government, including the funding pledges for the NHS which are higher than any other party’s.

Mr Corbyn is set to make “a major statement” on the NHS in Westminister on Wednesday morning and later he will address a climate change rally in Falmouth as he attempts to move the debate away from accusations of anti-Semitism in Labour.

Writing in Tuesday’s edition of The Times, the UK’s Chief Rabbi Ephraim Mirvis said Labour’s handling of the issue, which has dogged the party under Mr Corbyn’s leadership, was “incompatible” with British values.

Responding, the Labour leader insisted anti-Jewish racism was “vile and wrong” and that the party had a “rapid and effective system” for dealing with complaints, however, he refused to apologise when pressed during The Andrew Neil Interviews on the BBC.

Speaking as part of a BBC Wales debate later in the night, Ms Griffth said: “Jeremy Corbyn has arranged to meet the Chief Rabbi and I would say absolutely that we need to apologise to our colleagues in my own party who have been very upset and to the whole of the Jewish community as a whole, that we have not been as effective as we should have been in dealing with this problem.”

She added: “It is a shame on us, it really is, and it is something that I am very, very ashamed of, and something we must absolutely put right.”

Earlier in the day, Chancellor Sajid Javid struggled to explain – and refused to criticise – Boris Johnson’s use of words like “letterboxes” and “bank robbers” to describe Muslim women wearing veils, which he wrote in a column for The Daily Telegraph last year.

Boris Johnson later dismissed criticism by the Muslim Council of Britain and said: “What we do in the Tory Party is when anybody is guilty of any kind of prejudice or discrimination against another group then they’re out first bounce.”

Visiting the South West on Wednesday, Mr Johnson will set out plans for a “shared rural network” which would lead to new phone masts being built and existing infrastructure shared between the four mobile phone providers – O2, Three, Vodafone and EE – to strengthen signals in rural areas.

Labour will also pledge on Wednesday to set up Violence Reduction Units to tackle violent crime by understanding its root causes, while the Tories will outline a scheme to boost the number of children being immunised by reminding parents about forthcoming vaccinations.