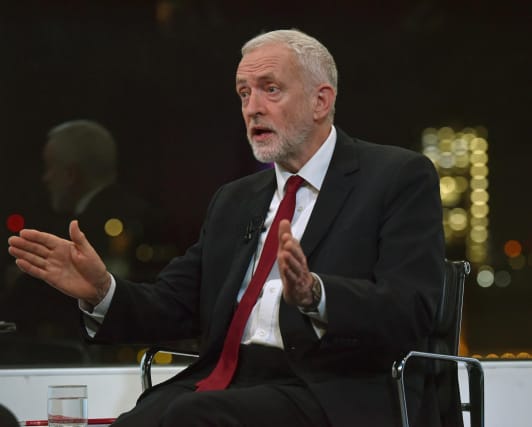 Jeremy Corbyn has refused to apologise to the Jewish community after the Chief Rabbi warned his failure to tackle the issue made him unfit to be prime minister.

The Labour leader said he does not tolerate anti-Semitism “in any form whatsoever” and called it “vile and wrong” – but he declined four times to apologise to the Jewish community in a BBC interview with veteran journalist Andrew Neil.

It follows a refusal by Chancellor Sajid Javid to criticise the Prime Minister for his use of language to describe Muslim women, after the Muslim Council of Britain accused the Conservatives of “denial, dismissal and deceit” with regards to Islamophobia in the party.

Mr Javid struggled to explain Boris Johnson’s use of words such as “letterboxes” and “bank robbers” to describe Muslim women wearing a veil, which he wrote in a column for The Telegraph newspaper last year.

During the BBC’s The Andrew Neil Interviews on Tuesday evening, Mr Corbyn accused Chief Rabbi Ephraim Mirvis of being wrong about part of his criticism of Labour’s handling of anti-Semitism.

He said: “I’m looking forward to having a discussion with him because I want to hear why he would say such a thing.”

The Labour leader was challenged over Rabbi Mirvis’s allegation that Labour’s claims it is doing everything to tackle anti-Jewish racism was a “mendacious fiction”.

“No, he’s not right. Because he would have to produce the evidence to say that’s mendacious,” Mr Corbyn replied.

He insisted he has “developed a much stronger process” and had sanctioned and removed members who have been anti-Semitic.

Mr Corbyn also denied that the blight increased after he took over the party, saying: “It didn’t rise after I became leader.

“Anti-Semitism is there in society, there are a very, very small number of people in the Labour Party that have been sanctioned as a result about their anti-Semitic behaviour.”

But he repeatedly refused to apologise when asked by Mr Neil.

“We will not allow anti-Semitism in any form in our society because it is poisonous and divisive, just as much as Islamophobia or far-right racism is,” Mr Corbyn said.

Mr Corbyn insisted he had “strengthened the processes” since a written warning was given to a member who questioned the murder toll of the Holocaust.

Chairman of the pro-Corbyn Momentum group Jon Lansman, who is also a member of Labour’s National Executive Committee, said some Jewish organisations have “refused to engage” with the party.

Speaking to Channel 4 News, Mr Lansman said: “A number of organisations in the Jewish community have unfortunately refused to engage with the leader himself.”

He added: “Look, I acknowledge the deep concern of the Jewish community about this but I think we are doing our best to deal with it, I really do.”

Earlier, in an exchange with reporters in Bolton, Mr Javid refused to criticise the Prime Minister’s use of language about Muslim women.

He said Mr Johnson had “explained why he’s used that language”, adding the article “was to defend the rights of women, whether Muslim women and others, to wear what they like, so he’s explained that and I think he’s given a perfectly valid explanation”.

Mr Javid added: “Whenever this issue has come about (for) the Conservative Party, no-one has ever credibly suggested that it’s an issue with the leadership of the party, whether that’s the leader of the party of the day or the chancellor or other senior figures, no-one’s suggested that.”

Later, Mr Johnson dismissed criticism by the Muslim Council of Britain of the Conservative Party’s handling of Islamophobia within its ranks.

On a visit to the International Aviation Academy in Norwich on Tuesday, the Prime Minister told reporters that he did not agree with the claim that his party had approached Islamophobia with “denial, dismissal and deceit”.

He added: “What we do in the Tory Party is when anybody is guilty of any kind of prejudice or discrimination against another group, then they’re out first bounce,” he said.

Campaigning on Tuesday by the two main parties was overshadowed by the accusations of failures to tackle racism.

Writing in The Times, Rabbi Mirvis said Labour’s handling of the issue, which has dogged the party under Mr Corbyn’s leadership, was “incompatible” with British values.

He said the overwhelming majority of Britain’s Jews were “gripped with anxiety” ahead of the General Election on December 12, warning “the very soul of our nation is at stake”.

His comments were seized on by Mr Johnson, who said Mr Corbyn’s inability to stamp out the “virus” of anti-Semitism in Labour represented a “failure of leadership”.

Mr Corbyn was greeted with shouts of “racist” by demonstrators as he arrived to launch Labour’s race and faith manifesto in north London, where he said the party does not tolerate anti-Semitism “in any form whatsoever” but he made no direct mention of the comments by Rabbi Mirvis.

Instead, it was left to Labour peer Lord Dubs – who came to Britain in the 1930s as a child refugee fleeing the Nazis – to say he believed the attack had been “unjustified and unfair”.

In his speech, Mr Corbyn described anti-Semitism as “an evil within our society” which had led to the Holocaust.

In his article, Rabbi Mirvis dismissed Labour’s claims to be doing everything it could to deal with anti-Semitism as a “mendacious fiction”.

“A new poison – sanctioned from the top – has taken root in the Labour Party,” he said.

“How complicit in prejudice would a leader of Her Majesty’s opposition have to be to be considered unfit for office?”

He received high-profile backing from the Archbishop of Canterbury, the Most Rev Justin Welby, who said his “unprecedented intervention” reflected the “deep sense of insecurity and fear felt by many British Jews”.

“Voicing words that commit to a stand against anti-Semitism requires a corresponding effort in visible action,” he said.