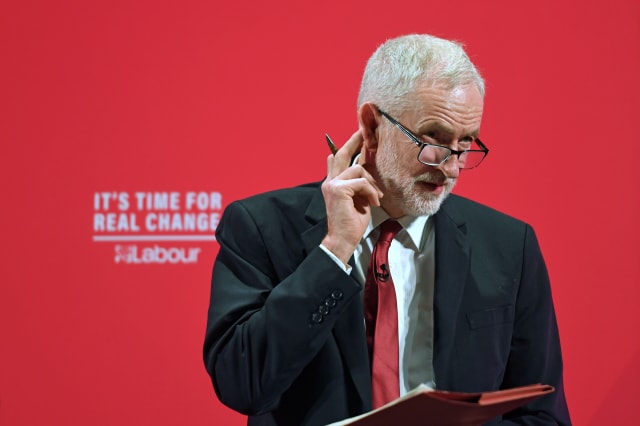 The Chief Rabbi’s unprecedented intervention warning that Jeremy Corbyn is unfit to lead the nation over his handling of the “poison” of anti-Semitism could not have come at a worse time for Labour’s election campaign.

The following morning the Labour leader was to paint his party as the champions of equality at his faith and race manifesto launch in Tottenham, north London.

Encouraged by Ephraim Mirvis’s letter to The Times, which was backed by the Archbishop of Canterbury, critics waited outside the Bernie Grant Arts Centre for Mr Corbyn’s arrival.

One staged a protest inspired by Hollywood movie Three Billboards Outside Ebbing, Missouri – with three vans emblazoned with stark warnings about Mr Corbyn, including “a vote for Labour is a vote for racism”.

“We are a pop-up group. If Corbyn is not elected we will pop back down again,” Mr Hoffman said among a handful of other demonstrators.

But highlighting just how febrile the issue is, one Jewish Labour member pointed to a news report that Mr Hoffman had been fined for threatening behaviour towards a pro-Palestinian activist.

Mr Hoffman, a 66-year-old economist from north London, said it was a “minor public order offence for shouting at anti-Semites”.

He described himself as a “floating voter” who has backed Labour and Tory in the past, and said he was protesting over “Labour’s failure to deal with anti-Semitism amongst its members”, adding: “It goes straight to the top.”

Mr Corbyn, entering the venue 50 minutes late, was met with a volley of chants from opponents branding him a “racist” and supporters who sung the usual refrain of “Oh, Jeremy Corbyn”.

The centre in the diverse area was filled with a cross-section of faiths and ethnic backgrounds.

The manifesto contains pledges to educate children on the legacy of the British Empire, slavery and colonialism for the modern-day UK.

It pledges to ensure attacks on places of worship, including synagogues, would be treated as a specific aggravated offence.

But it does not make its first specific mention of anti-Semitism until page 12.

Labour’s Lord Dubs – who came to Britain in the 1930s as a child refugee fleeing the Nazis – told party supporters he was “bitterly, bitterly disappointed” with the Chief Rabbi’s “unjustified and unfair” comments.

These were words Mr Corbyn did not echo. Instead he used his speech to say anti-Semitism is a “vile and wrong scourge” which Labour does not tolerate “in any form whatsoever”.

He did not directly address Rabbi Mirvis’s intervention, but did invite him, Archbishop Justin Welby and other faith leaders to meet him over their concerns.

She attempted to shift some focus on to Prime Minister Boris Johnson, who was accused of Islamophobia after writing that women wearing burkas “look like letter boxes”.

As well as attacking the Tories over the Windrush scandal, she highlighted a viral video showing a woman wearing a hijab bravely standing up for a Jewish man being targeted with anti-Semitic abuse on a train.

“Boris Johnson, you are wrong, they don’t look like letterboxes or bank robbers, but some look and are heroes,” Ms Butler said.

Mr Corbyn returned to the stage to take questions from three broadcast journalists, before missing all domestic newspaper reporters to give the opportunity to a range of others.

All three broadcasters pressed him on Rabbi Mirvis’s warning and the Labour leader replied: “There is no place whatsoever for anti-Semitism in our society, our country or in my party and there never will be.” It was a message that received rapturous applause.

Gal Dem – a magazine produced by women of colour – the Middle East Eye, and the Jewish News were among those given the chance to quiz him.

But with the Jewish newspaper apparently not present to ask a question, scrutiny moved to other subjects and Mr Corbyn avoided further tough questioning on anti-Semitism.

He left the venue through the stage door and was flanked by two lines of police as he answered none of the shouted questions and got into the waiting van with his advisers.

His next known stop was a television studio to face forensic questioning from veteran journalist Andrew Neil.

Mr Corbyn will have to convince voters who have been warned by Rabbi Mirvis that British Jews are “gripped by anxiety” that he is not “unfit for office” and is taking real and immediate action to allay their concerns.