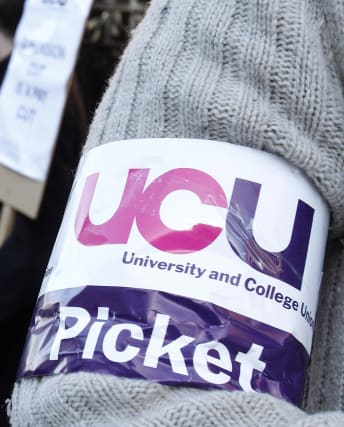 Students and universities around the UK are experiencing disruption as workers begin an eight-day strike in rows over pay, conditions and pensions.

Up to 43,000 members of the University and College Union (UCU) at 60 UK institutions are taking part in walk-outs in an action the union has said will affect about a million students in the run-up to the Christmas break.

UCU general secretary Jo Grady told the PA news agency that further industrial action could follow in the new year if agreements are not reached in the disputes.

University leaders have said they will try to lessen the impact of the action and insist they want to work with the union to reach an agreement.

Picket lines are being mounted at campuses across the country, protests held and other forms of industrial action launched, including not covering for absent colleagues and refusing to reschedule lectures lost to strike action.

Labour’s shadow education secretary Angela Rayner is due to speak at a rally in Manchester.

UCU said there had been “strong shows of support” for strikes at the universities involved, which it argued “sent a clear message that staff would not settle for pay cuts, increased pension costs or deteriorating conditions”.

The union said it is consulting with its branches at other universities about ballots to join further action, adding that 3,500 workers have joined UCU in the three weeks since this round of strikes was announced.

Ms Grady added: “If we don’t get a long-term sustainable settlement, then we will be in a position where we will be considering more action.”

UCU has said staff have reached “breaking point” over issues including workloads, real-terms cuts in pay, a 15% gender pay gap and changes to the Universities Superannuation Scheme (USS), which the union says will leave members paying in more and receiving less in retirement.

The union has estimated that the pension changes could leave lecturers around £240,000 worse off in retirement over their career, and up to £730,000 for professors.

A spokesman for USS employers said: “It’s important to remember that members voting ‘yes’ to strike action over pensions account for less than 10% of the scheme’s eligible membership.

“Universities are doing everything they can to ensure that students do not lose out. Online learning materials, libraries and student support services will remain available throughout this period to support students’ independent study.

“Today we are reiterating our call to the union to focus its efforts on continuing talks to reach a joint and fair solution.”

Carol Costello, a spokeswoman for the employers’ side, said: “We will do all we can to ensure the strike does not impact badly on students and staff.

“The action and claims of the UCU that employers are forcing them into this cannot go unchallenged.”

The union was insisting that employers should pay the full cost of an increase in pension contributions and had not been prepared to compromise, she said.

“It has been a complete red line for them and has made negotiating impossible.

“Employers are prepared to invest in our people, but unaffordable sums of money would have to be diverted from other budgets unless individual members make a fair contribution.”

This could include cuts to courses and larger class sizes, which would have a damaging impact on students, she said.

University leaders have written to the union outlining their commitment to deliver long-term reform of the USS.

The strikes will take place on five days this week, and again for three days from December 2.

Shadow education secretary Angela Rayner said: “Fair pay, secure contracts, reasonable workloads and decent, affordable pensions should come as standard for all those working in education, including in our universities.

“Thousands are on strike today because that simply isn’t the case in the increasingly marketised system that the Tories have created. Labour will end the failed free market experiment in education and instead put staff and students first.”