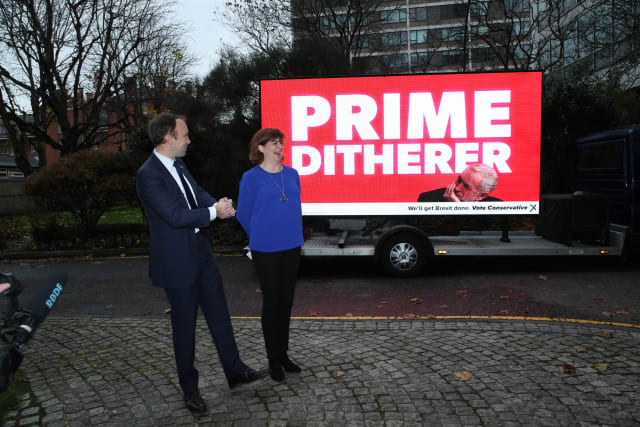 Tory candidates have written to their Labour opponents asking them to confirm where they stand on Brexit after Jeremy Corbyn said he would remain neutral in a second EU referendum.

The move comes as senior Conservatives called Mr Corbyn “Prime Ditherer” at a poster launch in Westminster following the Labour leader’s decision not to take sides in the proposed public vote on a new Brexit deal which his party intends to negotiate with Brussels.

The letters call on each Labour candidate to reveal what their plan is to “get Brexit done” and whether they will remain neutral in a second referendum, and if not how they will campaign.

Candidates are also asked if they will refuse to support any government which is reliant on the votes of the SNP and a second independence referendum.

The Tories said a pledge has been signed by every Conservative candidate to back Boris Johnson’s Brexit deal if was to be brought back to Parliament before Christmas.

Standing in front of the “Prime Ditherer” poster, alongside Culture Secretary Nicky Morgan, Health Secretary Matt Hancock said: “So Jeremy Corbyn is the prime ditherer as demonstrated by his position, his various positions on Brexit, and his lack of a position now.

“He dithered on opposing Russia when there was an attack on our soil at Salisbury.

“He dithered when Iran seized British a British tanker, and he dithered on whether to try to stop Isis in Syria.

“He’s the ditherer, the prime ditherer, on Brexit, on Scotland, on immigration and on security, and we can never let him into Number 10.”

This is not the first time the phrase “prime ditherer” has been used in British politics.

In 2016, former deputy prime minister Lord Prescott tweeted: “Theresa May has become the Prime Ditherer and Brexit will be her downfall.”

Asked who came up with the “Prime Ditherer” phrase, Ms Morgan told the PA news agency on Monday: “I think it was somebody from CCHQ. We’ve got a very talented team.”