A second cinema chain has withdrawn gang film Blue Story from its venues after a mass brawl at a screening in Birmingham.

Gangs of youths, some armed with machetes, clashed at the Star City cinema on Saturday evening and seven police officers were injured in the violence.

Six teenagers, including four 14-year-olds and a 13-year-old girl, were arrested in connection with the disorder and have been bailed by police.

Showcase Cinemas has now pulled the film from the listings of its 21 outlets across the UK.

It follows the move by Vue, which runs Star City, who said it will no longer be showing the film at any of its 91 UK venues.

The move came as Blue Story's writer and director, Andrew Onwubolu, condemned the incident and said that his film was about "love not violence". 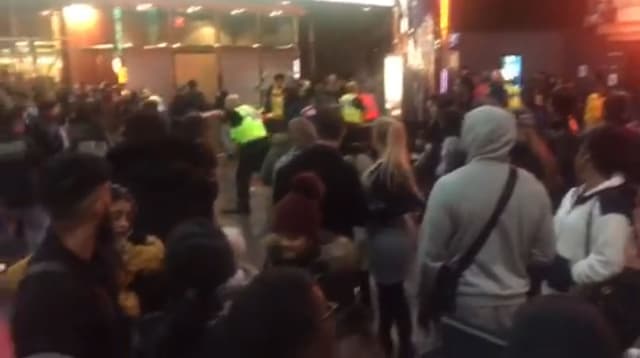 Writing on Instagram on Sunday afternoon, he said: "Sending love to all those involved in yesterday's violence at Star City in Birmingham.

"It's truly unfortunate that a small group of people can ruin things for everybody. Bluestory is a film about love not violence."

The film focuses on two friends from different south London postcodes, on rival sides of a street war.

Onwubolu added: "I pray that we can all learn to live with love and treat each other with tolerance and respect."

A spokesperson for Showcase said: "Due to the recent incidents tied to screenings of the film "Blue Story", after careful consideration with the film's distributor, Showcase Cinemas has immediately removed the film from our all of our participating cinemas.

"Any guests that have purchased tickets in advance can receive a full refund at the cinema box office.

"We remain in discussions with the distributor with regards to the possibility of re-introducing the film in due course.

"We apologise for any inconvenience but guest safety remains our top priority."