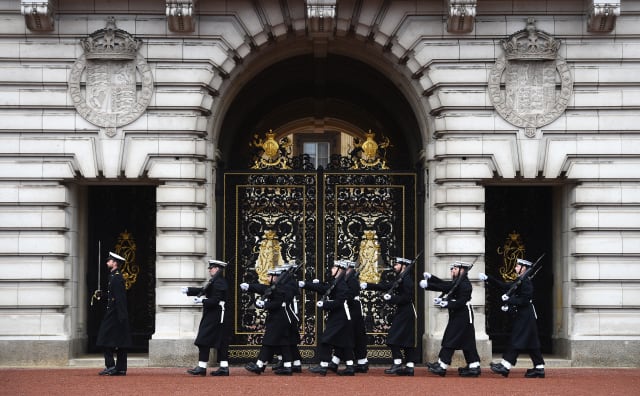 Royal Navy sailors have taken over as guards at four royal residences for the second time in history.

The sailors have stepped in to help the Army as many of its Foot Guards Battalions are busy on overseas operations or in training.

The Royal Navy’s time as guardians started on Monday at Buckingham Palace where 1 Battalion Grenadier Guards were replaced by a Royal Navy contingent of 35 during the Changing of the Guard.

They will mount guards at each of the Royal palaces and the Tower of London until December 19 when they march out of Windsor Castle and hand back the duties to the Army.

“This will be an intense and memorable experience for all of us at the end of several weeks of ceremonial duties training, just eight or nine days of it specifically on palace guarding, and could be regarded as the pinnacle of my professional career which began as a rating in 1990,” he said in a statement.

“The instructors from the guards could not have been better, for those eight or nine days they really put us through our paces and prepared us thoroughly for our Fit For Role inspection last week enabling us to mount guards today.”

“The sailors were outstanding and had clearly put a huge amount into their preparation, assisted by the Company Sergeant Major of Number 7 Company, Coldstream Guards and his team,” he said in a statement.

“They were well turned out, confident of all guard change formats and clearly enjoying the experience.“

The Senior Service sailors are from three of the five fighting arms – the Surface Fleet, Submarine Service and Fleet Air Arm.

The only other time they mounted guards was in 2017 – the Year of the Navy.