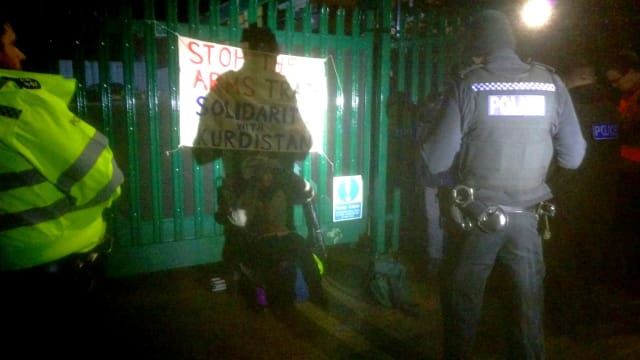 Anti-arms activists have vowed to increase protests against a warplane technology factory.

Protesters chained themselves to railings on an industrial estate near Brighton, East Sussex, on Monday in an effort to block shipments.

Activists turned up in the early hours of the morning, and “two or three” locked themselves to the fence, police said.

The EDO MBM Technology factory is owned by a global technology giant, and has worked on parts for aircraft including the F-35 Lightning II warplane.

Banners were hung up on the factory’s metal fencing, saying: “Stop the arms trade. Solidarity with Kurdistan” and “No bombs. No borders”.

Sussex Police said “two or three” people chained themselves to the railings and officers were sent to the scene to monitor the situation.

The police spokesman later confirmed that protesters had left the scene.

Following the demonstration, a spokesman for the protest group said: “Our action today succeeded in our aim of blocking all arms shipments from the factory for several hours.”

The spokesman added that the group intends to “increase protest activities against this factory” to continue to draw public attention to the business.

The EDO MBM factory, located in Moulsecoomb on the outskirts of Brighton, is owned by Harris Corporation.

The multi-national company has a six billion US dollar (GBP4.66 billion) annual revenue with more than 17,000 employees, according to its website.

Harris Corporation specialises in technology innovation for government and commercial customers, including for military aircraft and space applications.

In 2017, its Brighton premises was awarded a contract to develop technology for the UK’s F-35 Lightning II warplanes, the company’s website says.