The Conservative manifesto at a glance 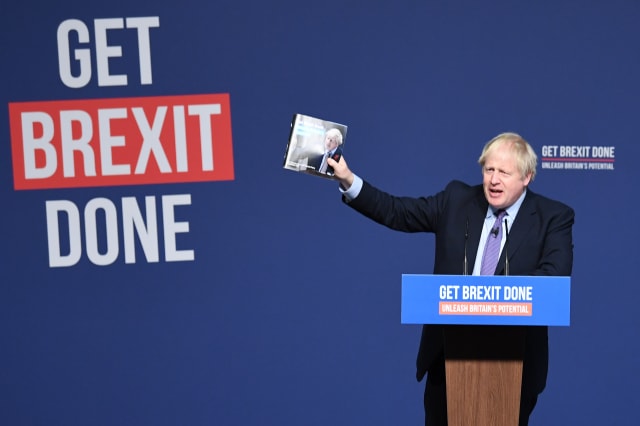 Boris Johnson has laid out his vision for government during a speech in Telford.

The Prime Minister held a copy of the document, called Get Brexit Done – Unleash Britain’s Potential, as he outlined his blueprint to “forge a new Britain”.

The 59-page manifesto contained few surprises, with most of the main policies trailed in advance.

Here is an at-a-glance look at the document.

The issue of leaving the European Union takes centre stage on the front cover, as the Tories reiterate the rhetoric of “Get Brexit Done”.

A Conservative majority government would start putting Mr Johnson’s Brexit deal through Parliament before Christmas with the aim of leaving the EU in January.

The party vows not to extend the implementation period beyond December 2020.

The Tories have pledged an extra 50,000 NHS nurses in a bid to plug the existing vacancy gap, which currently stands at more than 43,000.

The manifesto also reintroduces a nurse bursary – which the Government had scrapped – worth £5,000 to £8,000 per year.

The document says there will be 6,000 more doctors in GP surgeries and 6,000 more primary care staff such as physiotherapists and pharmacists.

Most of the crime-related proposals in the Tory manifesto are already familiar, with moves under way to recruit 20,000 police officers over the next three years to replace those lost due to budget cuts since 2010.

A spate of attacks on officers has also raised concerns about their safety, and the manifesto says the Tories would boost the number of Tasers and body cameras available.

They would also consult on doubling the penalty for assaulting an emergency services worker – the maximum prison term rose from six to 12 months last year and it would potentially increase further to two years.

The Conservatives have pledged £9.2 billion to improve the energy efficiency of homes, schools and hospitals.

Funding will include £6.3 billion to install energy saving measures to cut bills in 2.2 million homes, with a focus on social housing and people in fuel poverty.

The plans are part of efforts to meet the legal target to cut greenhouse gas emissions to zero overall by 2050 to tackle climate change.

The manifesto unveiled plans for a new National Skills Fund as the first step towards a so-called Right to Retrain.

The Tories pledged to invest £600 million a year, or £3 billion over the Parliament, into the fund, which will be on top of existing skills funding.

The Treasury will consult on the final design of the fund, and full details will be set out in the first Spending Review of a Conservative majority Government.

Action on behaviour, bullying and the arts feature among the Conservatives’ plans for education.

The party says it intends to expand an existing programme “to help schools with the worst behaviour learn from the best”, and there is also a commitment to back heads to use exclusions.

The party is also pledging to invest in arts, music and sport, including offering an “arts premium” to secondary schools.

The party said its “triple lock” will remain in place with no increases in income tax, national insurance and VAT for five years.

They said they not only want to freeze taxes, but to cut them too.

“Our ultimate ambition is to ensure that the first £12,500 you earn is completely free of tax – which would put almost £500 per year in people’s pockets,” the manifesto said.

The party said it will also end the benefit freeze, and will make sure those who cheat the system by committing benefit fraud are punished.

To help those looking after family members, especially women, the Tories said they will support the main carer in any household receiving the Universal Credit payment.

A Social Housing White Paper will be brought forward by a Tory Government which will “set out further measures to empower tenants and support the continued supply of social homes”.

The manifesto said they will commit to renewing the Affordable Homes Programme, in order to support the delivery of hundreds of thousands of affordable homes.

The party also pledges to “end the blight of rough sleeping”.

Contactless pay-as-you-go ticketing will be extended to nearly 200 more train stations in south-east England under a Conservative government.

The manifesto also re-stated a series of other rail pledges including building Northern Powerhouse Rail between Leeds and Manchester and overhauling the franchising model and giving metro mayors control over services.